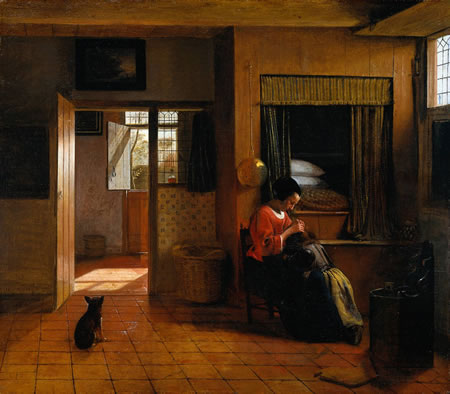 Pieter de Hooch (pronounced de HOOGH, with a hard “g”) is a fascinating painter, both for his own oeuvre and for the inevitable comparisons to his brilliant contemporary Johannes Vermeer.

Like Vermeer, de Hooch is noted for his paintings of quiet, light-filled interiors, and occasional tranquil street or courtyard scenes. De hooch was for a time in Vermeer’s home town of Delft, where he painted many of his best known works, and was a member of the Painter’s Guild there.

Though little is actually know about either man, it’s a fair assumption that the two painters were influential on one another, if not in friendly competition, as many of their subjects and scenes are remarkably similar.

Many of the same themes are present in both painters’ scenes of domestic life within the tiled and wood beamed interiors of Delft homes: people reading a letter, sharing a drink or performing household chores (even, in the case of de Hooch’s painting above, de-lousing a child’s hair).

The two painters have different palettes, Vermeer choosing cooler backgrounds against which his brightly attired figures glow with the colors of rich fabrics, brilliant highlights and, yes, luminescent pearls; and De Hooch opting for warmer earth tones for his interiors, in which his more plainly clothed figures seem integral to their environment.

De Hooch’s depiction of the people in his scenes is warm and sensitive, but he doesn’t have the psychological insight of Vermeer’s intense personality studies, or the sense of mystery they invoke, and de Hooch’s figures are a bit stiff, almost as if they are portrayed as part of the rooms they inhabit, which are, I think, the real subject of his work.

De Hooch painted Dutch middle class life with a calm, steady eye and a remarkable skill for painting light and the texture of materials. He was a master of perspective, and the complex lines of his interiors are marvels of linear geometry.

Though he never achieved the transcendent mastery of time, space and light that made Vermeer so singular, (who did?), de Hooch was a master of light in a different way. Where Vermeer would bathe his serene interiors with a single golden source of light, that flowed in from windows on the observer’s left and spread through his compositions like atomized honey, de Hooch revels in multiple sources of light, bursting in though windows and doors, cascading through hallways and splashing on tiled floors in a complex dance of interior atmospherics.

De Hooch’s paintings are wonderfully layered; rooms give way to antechambers, which give way to other rooms, which lead through doors to courtyards; each with their own sense of atmosphere and light, worlds within worlds. This is what I love about de Hooch, and once I started reading about him, I discovered that many others do as well.

You will often hear reference to his “keyhole” paintings, compositions that offer glimpses of other scenes through open doors or windows. De Hooch, like Antonello da Messina in his amazing St. Jerome in his Study, invites us to walk into and through his paintings, beckoning us on a journey within a single image, and tantalizing us with glimpses of other vistas just beyond where we’re standing.