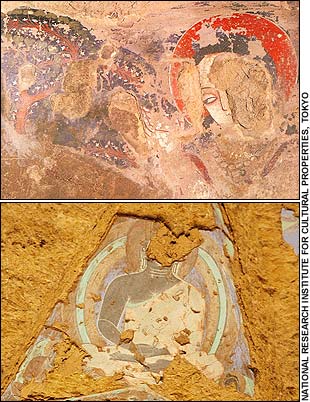 Yes, I know that Europe and Asia are actually one land mass, but the Earth’s supercontinent is so vast and diverse that it still makes sense to think of it as two separate continents, particularly culturally. I do think of the “mid-East” or “near-East” as being part of Asia, though (which, interestingly, makes Christianity an “Eastern” religion, not a Western one, but I digress).

A recent scientific discovery, sadly based on a cultural atrocity, has brought to light new evidence that places the development of oil painting in Asia, and several centuries earlier than the previously assumed development in Europe in the 15th Century.

In 2001 the Taliban thought it was in the interest of their God to destroy two huge statues of the Buddha (somebody else’s God, and so, unworthy of existence), in a region of Afghanistan north of Kabul. The statues were up to 180 ft (55 meters) in height. Along with cave murals in the area, that have also been the target of Taliban attacks, they date back to hundreds of years before the European Renaissance.

This kind of violent intolerance fits in with the mindless, hind-brain driven actions common to religious fanatics everywhere, but developed to a particularly extreme degree by the contemptible thugs of the Taliban, members of which have set out on a campaign to destroy treasured artifacts of other cultures that don’t fit into their pin-headed view of what’s “correct”.

The upside was that interest in the sites was sparked among rational human beings, and archeological and scientific investigation was focused, in particular, on the Buddhist cave murals.

An X-ray identification technique, carried out at the European Synchrotron Radiation Facility (ESRF) in Grenoble, was able to determine that about a dozen of the 50 or so caves were painted in pigments suspended in drying oil, possibly walnut oil or poppy seed oil, mediums still in use today.

The results of this investigation were just published in the Journal of Analytical Atomic Spectrometry on Tuesday, though they were presented at a scientific conference in Japan in January.

Although these oils had been in use previously in Rome and Egypt, they were used for medical and cosmetic applications, not art.

The cave oil paintings, depicting Buddhas with settings of palm leaves and mythical animals, date back to the middle of the 7th century, making them by far the oldest established examples of oil painting known.

The use of oil painting in Europe most likely was developed independently, but like the “discovery” some time ago that paper, ink and even movable type, existed in China well before their use in Europe, cultural prejudices have to be readjusted as the past continues to change.

As disconcerting as this can be, it reinforces one of the best things about rationality and scientific method; at its best it can break down cultural prejudice with the clear light of scientifically tested fact, in sharp contrast to the willful, self-inflicted blindness of fanaticism.

Religion is better than science at inspiring art (though science and technology are an integral element in the creation of artworks), but rationality is a better protector of art once it exists.