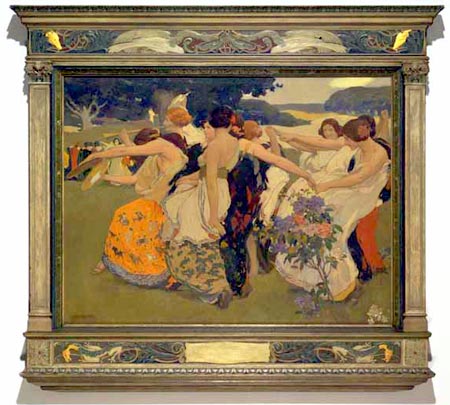 Athur Mathews was a California painter active in the late 19th and early 20th Centuries.

Mathews is sometimes thought of as an Art Nouveau artist. He and his wife Lucia Mathews, also an artist and one of his former students at the Mark Hopkins Institute of Art in San Francisco, brought together influences from the European Art Nouveau artists, the burgeoning American Arts and Crafts movement (of which they were an influential part) and the ideals of classical art, and created a style that came to be called the California Decorative Style.

Arthur Mathews was trained as both an artist and an architect. He studied painting at the San Francisco School of Design and later at the Academie Julian in Paris. There, like many American painters of the time, he was exposed to the creative explosion of avant-garde European art. Unlike most of his compatriots, he did not become enamored of the techniques of the French Impressionists, but took his inspiration from the graceful elegance of Art Nouveau (see my post on Alphonse Mucha) and the sublime tonalism of Whistler. (It’s sometimes hard to remember that Art Nouveau and Impressionism were essentially contemporary, Mucha and Gauguin shared a studio for a time.)

Mathews returned to California and became director of the San Francisco School of Design; and brought his various influences to bear on the creation of brilliantly colored and elegantly naturalistic California landscapes. He became an influential teacher and, though he was not a proponent of Impressionist ideals, counted among his students major figures of California Impressionism and plein air painting like Granville Redmond.

Arthur and Lucia produced a range of artistic and decorative works — stained glass, carved frames, furniture, graphic design and illustration. After the San Francisco earthquake of 1906, they joined with like minded artists and artisans and tried to make their part in rebuilding San Fancisco a guiding and enlightening role, with the dream of making the city a cultural utopia.

Unfortunately, there aren’t lot of high-resolution images of their work on the web just yet. As their influence and importance is rediscovered, that should change.

Those in the Ohio area can see an exhibit currently at the Akron Art Museum (originally organized by the Oakland Museum of California) called California as Muse: The Art of Arthur and Lucia Mathews that runs until September 7, 2008.

For the rest of us, there is a new book created to accompany the exhibit, The Art of Arthur & Lucia Mathews by Harvey L. Jones.

There is a nice post about Arthur Mathews, with several images, on the 2blowhards blog, and I’ve listed what other resources I could find for you below.