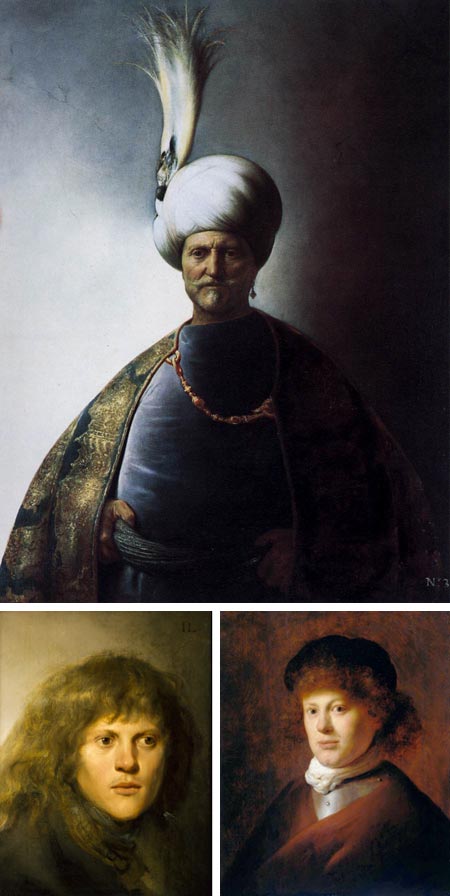 Our picture of art history, including the relative importance we assign to individual artists, is always changing; and a good thing too, as inaccuracies and jaded opinions often need to be corrected.

This is the aim of an exhibition at the National Gallery of Art in Washington, DC, called Jan Lievens: A dutch Master Rediscovered.

Lievens was a friend, rival and studio-mate of Rembrandt, and despite acclaim and popularity in his own time, has for many years been lost in chiaroscuro darkness of that master’s considerably voluminous shadow.

The exhibition seeks to correct this and bring Lievens, whose talent in many areas rivaled or even surpassed Rembrandt’s own, into the light he so adeptly painted.

You will see in Lievens many of the same subjects, influences, techniques and approaches as Rembrandt, as in the costumed portrait above (more detail here); and scholars are in dispute about which of the artists, who shared models, materials and studio space for a time and may have even collaborated on each other’s works, originated what methods and practices.

Even their approach to graphics, and their skill with the process, were comparable.

There are differences as well, of course, and the two artists diverged in style and approach as they got older and went their separate ways.

It’s interesting to compare Leiven’s self-portrait (above, bottom left, larger version here) and his portrait of his friend Rembrandt (above, bottom-right, larger image here) with the slightly elder (by one year) artist’s own self-portrait from about a year earlier. Either Rembrandt was harsh in his own self-image, or Leivens was adept at artistic flattery; I suspect the truth is a little of both.

Jan Lievens: A dutch Master Rediscovered is on view at the National Gallery until January 11. 2009. It then moves to the Milwaukee Art Museum from February 7 to April 26, 2009, and then to the Rembrandt House Museum in Amsterdam from May 17 to August 19, 2009.

The National Gallery has an interactive feature about the exhibition. You can also download the exhibition brochure (PDF 3.2 mb), and an excerpt from the exhibition catalog (PDF 478k). The catalog itself is available from the Museum Shop or from traditional sources like Amazon.

The Wall Street Journal also has a slideshow and review of the exhibition.

The tides of art history haven’t been as kind to Leivens as to his compatriot, but perhaps this is the beginning of a resurgence of interest in an unjustly sidelined Dutch Master.

Addendum:The show will be at the Milwaukee Art Museum from February 7 to April 26, 2009.