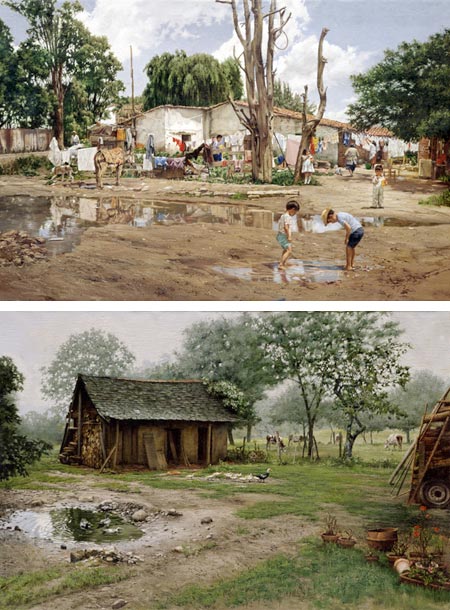 In addition to receiving a degree in physics from Haverford College in 1944, and an appointment to work on the Manhattan Project in Los Alamos, Clark Hulings studied art with George Bridgeman (whose books on anatomy are among my favorites) and influential teacher Frank Reilly (see my post on Frank Reilly) at the Art Student’s League in New York.

Health issues prevented Hulings from joining the atomic bomb project and he turned to his love of art for his career.

He started in portraiture, but the demands of sitters made him more inclined to a career in illustration. Even as he established a successful career as an illustrator, his desire to pursue easel painting, particularly landscape, led him to study in Florence, Italy for three years, and on his return to the U.S. he pursued landscape painting while continuing his illustration career.

Hulings eventually transitioned from illustration to gallery painting full time. He became an accomplished and well respected painter. His careful observations and tonally complex compositions make for evocative images from his travels across the globe, but particularly shine in his portrayals of rural Mexican village life, from colorful markets to humble shelters to quiet domestic scenes.

Hulings’ paintings interweave patterns of light, often brilliant white against walls and the sides of buildings, with areas of more subdued contrast that are rich with visual texture.

The intricate interplay of light and texture, and his attention to visual detail, can make his paintings seem tighter than they actually are when seen in reproduction, an impression that is unfortunately not dispelled by the small images on his own site and elsewhere on the web. However, if you take a look at the zoomable image of this painting on the Sotheby’s auction site, you can see the actual loose and painterly quality of his work.

Also unfortunate is the fact the the Flash slideshow on the Painting Gallery section of his web site doesn’t function properly (image sections overlap and cover other sections); however there is an older Image Gallery still linked from the Contact page, that is more straightforward.

There also images on the Store page. In addition, there are books and DVDs available directly from his web site; and others, some out of print, available from sources like Amazon.

There are a few videos on YouTube and Hulings’ Facebook page that are audio excerpts of his lectures at the Art Students League, as well as an additional gallery on Facebook.

One Reply to “Clark Hulings”