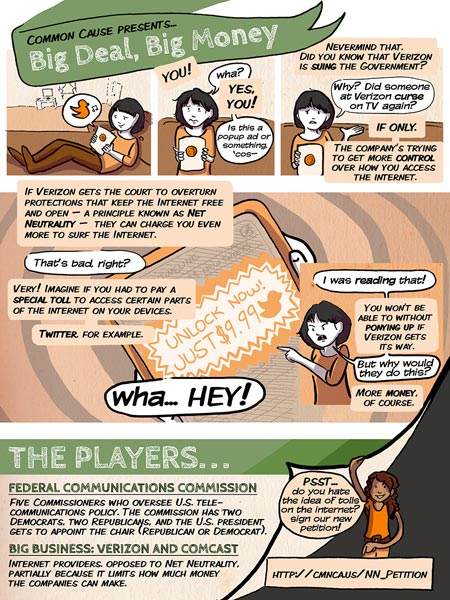 Common Cause is using a long, scrolling, comics style infographic to explain the latest attempt by Verizon to undermine the principle of Net Neutrality.

Called Big Deal, Big Money, the graphic was co-produced with Symbolia, and illustration credit is given as “S. Caldwell” (for whom I haven’t been able to turn up a first name or website yet).

Just in case there is any confusion (and there probably is, because the telcos and other big business interests have done their best to deliberately confuse you on this issue by using bogus terms like “Internet Freedom” to mask their power grab), I’ll state unequivocally that Net Neutrality is a Good Thing (capital “G”, capital “T”), and if big content and the telecommunications companies succeed in undermining it, much of the internet as you know it, including things like Lines and Colors, will gradually disappear.

No, I’m not being unduly alarmist, and yes, I understand that the technical issues are not straightforward — but the basic principle is.

Net Neutrality means that the companies responsible for transmitting data across the internet must treat all information equally.

What Verizon and other telcos want is to allow big business to pay for their data streams to be given preference over those from sources who can’t pay as much, like yours or mine. The end result is that smaller sites will eventually become much slower and harder to access than big ones, and will gradually become marginalized — so gradually that it will be hard to notice until its too late.

The end goal is that Big Content will essentially be able to co-opt the internet and turn it into another channel of information and entertainment that they control, like television and radio.

(Think I’m exaggerating? Look up the history of radio broadcasting and how bandwidth once available to the public was given away by congress to big business in return for overt bribery, and the public was eventually banned from broadcasting radio in regular broadcast bands. Why would you think they wouldn’t try the same thing with the internet?)

Yes, there are issues in which some kinds of internet data may have to be transmitted differently as a practical technical issue (which is where it gets complicated) but that’s not what this is about. This is about the internet equivalent of driving down a highway and having to pull over to let rich people go ahead of you because they can pay more to use the highway.

But I digress, and I’m rambling on, which is where comics do a better job of explaining…