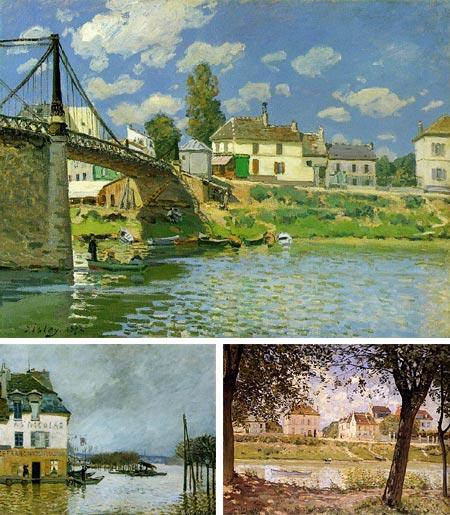 Along with Gustav Caillebotte Alfred Sisley is one of my two favorite “ignored” Impressionists.

Sisley is usually lost in the glare surrounding Monet, the “star” of Impressionism, particularly since Sisley’s work at its most “Impressionistic” resembles a slightly anemic version of Monet’s prismatic marvels.

Often referred to as “the English Impressionist” Sisley was actually born in Paris of English parents. He became friends with Monet, Renoir and Bazille as a student in the atelier of Marc-Charles-Gabriel Gleyre. With them, Sisley was one of the founding members of the Impressionist movement and is sometimes referred to as a “typical” impressionist.

This attitude, along with a lack of substantial biographical information and the overwhelming presence of Monet and other Impressionist painters with more distinctive styles, has long pushed Sisley into the background.

What I find most appealing about Sisley, however, can be found in his paintings that live somewhere on the realist side of full-blown Impressionist technique, painted honestly and directly with more of an eye to the color and light of the scene than to the abstract notions of purity of color and optical mixing of hues. The result is a fresh, painterly approach in which the feeling of light and color are more important than technique.

His palette is also likely to be more subdued than Monet at his most explosive, preferring a more naturalistic harmony of color. Although very influenced by his Impressionist compatriots, Sisley considered himself a student of Corot and also showed the influence of Courbet and even Constable.

He was fascintated with the effects of light and shadow and the process of capturing them by plein air painting. Sisley, even more than the other Impressionists, was a painter of water. His canvasses were often divided into horizontal bands of sky, land and water, as in the examples above.

I have occasionally seen his work referred to as “cold” or “reserved” but I’ve never felt that. I’ve always thought of his paintings of the French countryside and, in particular, the River Seine, the Thames in London and other streams, as quiet and contemplative, without the splashy drama of Monet or Renoir.

Compared to the more prominent Impressionists, there are few books available on Sisley, representative of the general tendency to ignore him on the way to cashing in on the most popular names. This catalog from a 1992 retrospective is out of print, but nice if you can find a copy. Richard Shone’s scholarly study, Sisley, is probably the most widely available book, and has nice reproductions as well. If you’re lucky, you might find Janice Anderson’s little hardback Life and Works of Sisley on a chain store discount shelf for $3.

The good news is that seeing a real Sisley in person is relatively easy. His paintings can be found in collections and Museums throughout the US and Europe. There is a listing to start with on the Artcyclopedia site. I’m delighted to say there are at least 6 here in the Philadelphia Museum of Art (although only 2 or 3 are likely to be on display at any one time).

The tendency to ignore Sisley when thinking of Impressionist painting is sad, particularly as a parallel to the difficulties he faced later in his life and career. To me he is a hidden gem, a treasure waiting to be discovered and enjoyed.

Spend some quiet time with Sisley’s subtle masterpieces and you may agree.