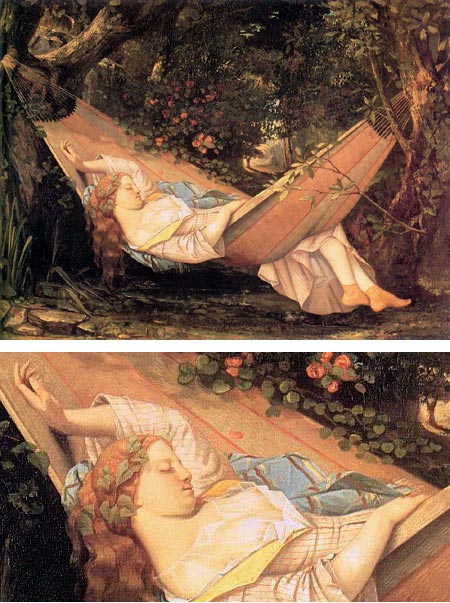 Because we live in a Post-Modern age (I love that term, “post-modern”!), we tend to think that everything prior to Modernism was “Realism”. Actually with a few exceptions, most representational art is far from being realism. Most of it is romantic or fantastic or devotional or in some manner represents life in a way that is far from “realistic”.

The Dutch genre painters brushed with realism when they painted their scenes of everyday life, but “Realism” was an actual style of painting, initiated by French painter Gustave Courbet, who is also credited with coining the term. And, far from being the prosaic, “ordinary” art that Modernism would “liberate” us from, Realism was a revolutionary style, born out of political revolution and running counter the accepted art standards of the day, which were firmly entrenched in Romantic and Neo-Classical art.

Courbet painted peasants as peasants, as they actually looked. He painted genre scenes, depictions of everyday life that were ordinarily done on a small scale, on the kind of grand canvasses normally reserved for the depiction of royalty, implying, of course, that one was as important as the other.

Courbet’s insistence on painting life as is is, rather than an idealized fantasy of how is should be, made him an outcast of the art establishment at the time, the Paris Salon, but eventually made him popular with those who rejected the established order, something that was happening all around him because he was in the middle of the Paris Commune during the collapse of the revolutionary government in the 1870’s.

Courbet also changed the way paint was handled, eschewing smooth, refined and blended finish for rough handling of the paint and leaving visible brushstrokes. This, along with his devotion to truth in representing nature, made him very influential with the Impressionists, who would carry on with their own revolution in painting. Courbet would also create his own exhibition spaces when refused entry in the official Salons, again setting the stage for the Impressionists’ participation in the Salon de Refusés. The Impressionists didn’t spring up without precedent, they walked on trails blazed by Courbet (particularly in his seascapes), Corot and Manet.

Meanwhile, here in the post-modern world, those on the East Coast of the US have an opportunity to see an exhibition called Courbet and the Modern Landscape at Walters Art Museum in Baltimore from now until January 7, 2007.

Because of Courbet’s rejection of romanticized images, the art establishment accused him of deliberately cultivating “ugliness”. I’ve had the pleasure of standing in front of his large works in the Musée d’Orsay, and the idea of Courbet depicting “ugliness” brings a smile to my face as easily as the phrase “post-modern”.