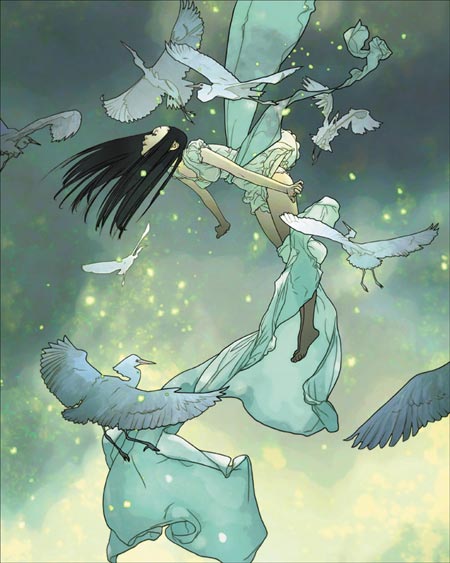 Joshua Middleton is a comics artist who works in mainstream American comics, but whose work feels outside of that world in many ways.

Middleton draws in an open lined style, with few spotted blacks, that feels to me like it carries more influence from Japanese and European comics than major American comics. Nonetheless, after a stint on Crossgen’s Meridian and a short run on his own creator owned project, Sky between Branches (image above), he went to work for Marvel Comics, creating covers and sometimes interior art for titles like NYX, New Mutants and X-Men Unlimited. He did a bit of work for Udon and Dark Horse and then Moved to DC, where he has done a number of covers and the full mini-series Superman/Shazam: First Thunder (with writer Judd Winick). Middleton seems to have settled in there as a cover artist for Vertigo titles like American Virgin.

Middleton’s site features galleries of his work from various projects, arranged by covers, comics pages and sketches & character designs, including some concept designs for Serenity’s “Inara”. He started a blog this fall in which he posts unpublished work, sketches, news, notices of originals that are up for auction and sometimes some YouTube style vids of images as he works on them.

Middleton often does the complete artwork for the pieces he works on, pencils, inks and colors, again more in keeping with European and independent comics than the normal approach of major American comics companies, which is based on a team model (or assembly line if you want to be cynical).

His ink rendering style utilizes a fine outline, with little variation in line weight, also like the European ligne claire comics style or like inks for animation. His color feels almost like cartoon cell painting, with broad areas of relatively flat color laid against one another with few gradients or painted effects except in backgrounds.

He works with lots of subdued, neutralized colors, particularly blues that are pushed almost to gray. It’s an unusual approach for mainstream comics coloring, although it has some characteristics in common with coloring for some American comics that are very manga influenced. The difference is that Middleton does it with more aplomb and a firmer knowledge of anatomy and geometric form than the color artists for many of those titles.

Overall, though, Middleton’s aim seems always to be in service of the emotion of the story, whether in characters faces or the emotional effect of color and tone on the scene as a whole. I hope his success as a cover artist doesn’t keep him from applying that approach more sequential work; telling stories, after all, is what comics do best.

Link: www.joshuamiddleton.com/
Middleton's Sketchbook (blog)
French fan site
Interview on Sequential Tart (from when he was working for CrossGen - 2000?)