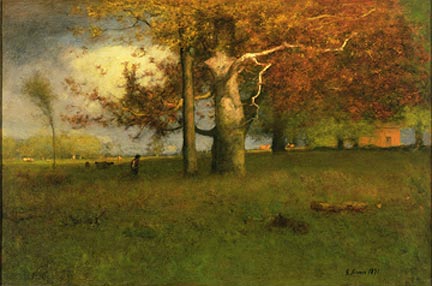 At a time when his fellow Hudson River painters were searching for the most wild, untamed and and dramatic landscape subjects they could find (or sometimes combine and invent, in the case of Frederic Church), George Inness chose to paint settled and cultivated lands, the farms and fields in which both God and man had made their mark.

Inness started his career painting in a style in keeping with the other Hudson River School artists, but his trips to Europe exposed him to the artists of the Barbizon School of France, which changed his palette and approach. Inness eventually eclipsed the Hudson River School painters and was regarded as the finest American landscape artist.

In his later career, he was exposed to an influence of another kind that also changed his painting dramatically. He became enthralled with the theological philosophy of Emanuel Swedenborg, a Swedish scientist, philosopher and Christian mystic who believed (among other things) in a direct relationship between the natural and spiritual worlds. Inness took Swedenborg’s model of “as above, so below” to heart as a belief that the divine could be revealed by contemplation of the natural world, and attempted to convey that divine essence in his paintings.

His later work is loose, fresh, painterly and shares characteristics with the Barbizon School, some of the Symbolist painters, and even the Impressionists, but is uniquely his own. Although he disliked Impressionism, Inness shared some of their immediacy, attention to nature, qualities of paint handling and enthusiasm for working en plein air, although Inness finished his works in the studio.

The paintings from his later career diverge from realism and have a poetic quality that is hard to describe. Inness searched for the emotion in the scene before him and tried to represent that, more than the mere reconstruction of the scene’s superficial appearance. There is often a feeling in Inness paintings of something impending, waiting to be revealed, as in the image above, Early Autumn, Montclair, which I’ve had the pleasure of “growing up with”, seeing it often over the years at the Delaware Art Museum.

George Inness’ landscapes are not so much pictures to be looked at as invitations to look deeper, or what Inness called “the visible upon the invisible”.