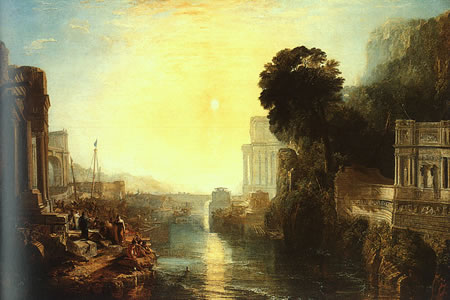 In the canons of modern art criticism, Turner is considered more important. His search for atmospheric effects and the emotional drama of color, which led to dramatic canvasses roiling with waves and clouds, are seen as a precursor to Impressionism and Modernism, and we all know that post WWII Modernism is the pinnacle of artistic achievement to which the previous 2000 years were a mere warm-up (he said, while rolling his eyes and making a rude gesture).

I like Turner; his work can be striking, dramatic, and dazzling; but I have to say that I find Constable just as interesting, more in fact; and I find more powerful antecedents to Impressionism in Courbet and, in particular, Corot (though Turner certainly set the stage for Whistler’s nocturnes). I just don’t see Turner as quite the turning point (if you’ll excuse the phrase) in the history of art that he gets credit for in the standard texts.

It will be interesting to see what Simon Schama has to say in tonight’s Power of Art (10pm on many PBS stations here in the U.S.), though somehow I think he will take the Modernist view of assigning Turner pivotal importance in the path to Modernism.

It might be helpful to look at Turner’s sources and influences. Constable apparently wasn’t one of them; reportedly Constable was interested in Turner’s work, but not the other way around (though there’s very little influence passed in either direction between them). You can see precedent for Turner’s great washes of sky and color in Claude Lorrain’s volumetric spaces bathed in light. Both Turner and Constable were probably influenced by Gainsborough, and perhaps even Caspar David Friederich.

Turner’s early work was richly detailed, his later paintings washed in color. In the middle the two blended, as in the history painting above, Dido Building Carthage, which I’ll offer in contrast to Slave Traders Throwing the Dead and Dying into the Sea – The Typhoon Approaches, the painting Schama will be focusing on.

Turner considered Dido Building Carthage his greatest work, and reportedly indicated in the first draft of his will that he wanted to be wrapped in the canvas when he was buried. He eventually thought better of that and donated the work to the National Gallery in London, apparently with the stipulation that it be displayed next to a seascape by Claude Lorrain that he found particularly inspiring.