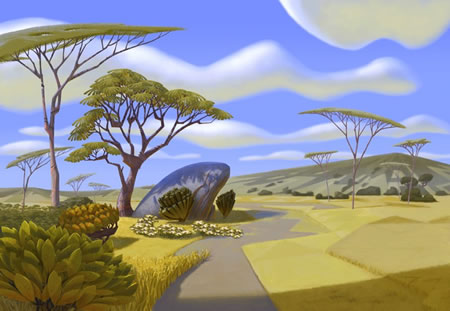 His film credits include The Little Mermaid, Beauty and the Beast, Aladdin, Fantasia 2000, Space Jam, Shrek, and the upcoming John Carter and the Princess of Mars and The Spiderwick Chronicles.

In 2001 he formed High St. Studio as a preproduction and design studio for films, television and the gaming industry.

The galleries on the site include some of his beautiful concept art for these features and other projects. His drawings and color renderings are filled with wonderful suggestions of detail, luxurious textures, and a striking use of color and theatrical lighting. Perkins has the kind of loose, fluid drawing style that can only be founded on the confidence of solid draftsmanship.

There is a gallery on his site of “Continuity Guides”, something rarely posted, even by concept artists. These offer a fascinating glimpse into the concerns for consistency and design clarity that are important to the art of visual storytelling, animated and otherwise. The world that characters inhabit can be as fantastical as the design artists can imagine, but to be effective it must be consistent within itself.

The High Street Studio Continuity Guide gallery includes Style Guides, Color Scripts, and Workbooks used as previsualization tools for directors and guides for concept artists to keep them on the same page with the look and feel for a given production.

This is a more interesting process than it may sound like on the surface. The first item in that section, for example, is concerned with the design for grasslike plants for a production of GON (which I assume refers to a film adaptation of the Manga dinosaur character), in which a fantasy version of an African veldt-ike environment is being designed. The plant design develops as a combination sketches from real world plants and stylized drawings based on Henri Rousseau’s “primitive” painted plants.

Rousseau is referred to again, along with Cezanne, Escher and other artists, in description of the kind of visual space that can be defined for the characters — “Flat Space”, as exemplified by Rousseau, in which elements are essentially all on the picture plane; “Deep Space”, the traditional two-dimentional projection of three dimensional reality that is the basis for realism; “Limited Space”, a range between the first two, demonstrated in the paintings of Cezanne; and “Ambiguous Space”, as in the deliberately disorienting images of M.C. Escher.

There are also continuity guides on ths site for the overall color palette of an animated film, in this case, Tarzan. Just as a painting can have passages of different colors, that must still work together as a whole; so can a visual story, such as a live action or animated film, have passages in which certain colors and moods predominate but must fit into a unified visual feeling for the piece as a whole.

The design of basic elements can vary within a story as well, in order to enrich the sense of place. There is a model sheet of tree branches for the animated Tinkerbell, demonstrating how tree branches are to be drawn differently for the backgrounds of scenes in London, Neverland and Pixie Hollow.

Perkins’ site also features a section of color and monochrome sketches, including some wonderfully fluid life drawings, and a selection of storyboards.

What’s missing, unfortunately, is much information about the artist himself. The very brief bio on Wikipedia indicates that he is currently teaching composition, color, and watercolor at the Los Angeles Academy of Figurative Art. His bio on the LAAFA site tells us that he began his career in gallery art, was one of the co-founders of the Plein-air Artists of California and has been a member of the Plein-air Painters of America since 1985.

I wasn’t able to find a dedicated online gallery of Perkins’ plein-air painting, but Michael Hirsh of Articles and Texticles comes through again with a post on Perkins from last year that includes some of his landscape paintings.

Unfortunately, I’m late in telling you about an exhibition of Perkins work at the Laguna College of Art and Design that just closed Septemebr 27.

Not only do Perkins drawings and paintings, concept designs, model sheets and workbooks offer a fascinating insight into the level of thought and detail that goes into good visual storytelling; the range of influences in his work points out the connections I am always trying to suggest between various genres of visual art that people often assume are distinct and separate from one another.