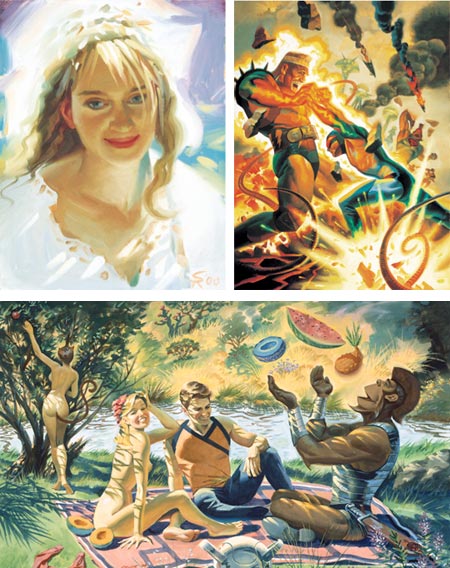 I received a copy of Steve Rude: Artist in Motion from Flesk Publications.

Flesk is a small specialty art book publisher that was the subject of one of my first posts on lines and colors in which I praised their terrific collections of the work of pen and ink greats Joseph Clement Coll and Franklin Booth.

Since then, much to my delight, they have continued to expand and produce terrific books on illustrators like James Bama and contemporary comics artists like Mark Schultz and Steve Rude; and I wrote a follow up post on Flesk last Summer.

Over that time I’ve come to expect high standards in the production of their books, which are simply excellent, but I have to admit I was actually surprised at what a beautiful book they have produced in this latest volume. Not only is it a larger and more extensive book than I had expected, it covers a range of Rude’s work that was eye-opening.

Steve Rude is best known as a comic book artist. He is the co-creator, with writer Mike Baron, of Nexus, one of the most unique takes on the science fiction/super-hero genre ever produced. Rude has also applied his superb draftsmanship and story-telling skills to several other comics projects, including his own character The Moth, and mainstream characters like Superman, and even Space Ghost.

There is, of course, plenty of art from Nexus and Rude’s other comics work here, including preliminary sketches, model sheets, penciled and inked pages (often of the same page or panel, which I particularly enjoy). There are also many of his painted comics covers. In addition, however, are a large number of his other paintings, which is where the book really shines.

Rude is an artist who isn’t afraid to wear his influences on his sleeve. He has taken as his favorites some of the best, Alex Raymond, Jack Kirby and Russ Manning in the comics field, and for painting some of the terrific and under-appreciated illustrators of the mid-20th century like Harry Anderson, John Gannam, Haddon Sundblom, and in particular, Andrew Loomis.

Rude was instrumental in the production of the book, and in fact shares writing credit with publisher John Fleskes; and he is not only quick to acknowledge his admiration for these artists, but goes into some detail about them and also discusses his process of learning and discovering techniques form the study of their work.

That’s another remarkable thing about the book, in the process of creating a dazzling art book of Rude’s work, there are enough studies, preliminaries, and step-throughs that the book is also instructional. In several cases it includes original reference photos and preliminary sketches next to the finished work. There are also sections of Rude’s life drawing and animation work.

If you’re not familiar with Rude’s work, you can browse through the small gallery on the Flesk site and also click on the right two images on the book’s page. Unfortunately, the images are small and the ones chosen fall way short of giving a feeling for the real nature of the book.

You can also see some of Rude’s work on his own site, including a clip of one of the painting demos he has been giving in various locations.

All in all, this is a beautiful book notable to those interested in both comic book art and illustration in the classic tradition.

Steve Rude: Artist in Motion can be ordered directly from Flesk Publications, from Amazon, or from your local bookstore or comic book store.

One Reply to “Steve Rude: Artist in Motion”