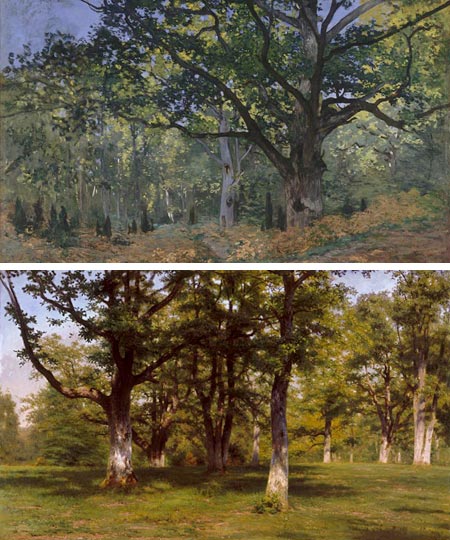 About 55km (35 miles) Southeast of Paris is a stretch of forest that could be considered the cradle of the modern practice of painting “en plein air” (“in the plain air” or simply “outdoors”), as well as the approach to painting that came to be called the “Barbizon School” and the style derived from them that would develop into French Impressionism.

Here, artists like Jean-Baptiste Camille Corot, Théodore Rousseau, Jean-Francois Millet, Charles-François Daubigny and others gathered in the unofficial artists colony in the town of Barbizon, from which they could walk into the surrounding forrest, with their newly portable painting equipment in hand, and capture the drama and beauty of the still-wild landscape.

The practice of painting on location, while not entirely new, had not been practiced to such a degree or by such a large group of painters before, and the very choice these painters had made to make nature the center and subject of their paintings, rather than a backdrop for human activity, was radical; carrying forward the emphasis placed on landscape by English artist John Constable.

They were followed by the young Impressionist painters Claude Monet, Alfred Sisley, Frédéric Bazille and Auguste Renoir, who, at the urging of atelier master Charles Gleyre, traveled to the Fontainebleau Forest from nearby Paris to also exercise this new practice of painting directly from nature.

In the Forest of Fontainebleau: Painters and Photographers from Corot to Monet is a newly opened show at the National Gallery of Art in Washington, D.C., highlighting many of these painters, as well as artists in the new medium of photography, who found similar inspiration in the dramatic scenery of the forest.

Corot and Monet are the stars here, and Corot is the master; unsurprisingly as we are in his territory. Though most of the works here are large, finished studio works, you can see where they are informed by the open-air painting that they developed from, and many small location sketches are included as well. Here is not only the direct representation of nature and natural light, but the direct, open brushwork on which Impressionism, and many related schools of painting. would be based.

Corot is a favorite of mine, and will the subject of a dedicated future post, and he is at his finest here, with his remarkable presence for the individual “personalities” of trees in the midst of broader scenes.

Monet is presented as you rarely see him, as a mature painter, but prior to the development of the “Impressionist style”. Here is Monet in dark forest glades, painting directly and without the scattering of short brushstrokes, though obviously already fascinated with effect of dappled light and shade (image above, top). Sisley and Bazille are right at home with this style, and Renoir turns in terrific pieces as well. There are some famous works, like one of Monet’s preparatory panels for his abandoned attempt at Déjeunier sur l’Herbe, and Bazille’s Improvised Field Hospital, depicting Monet in bed nursing his banged-up leg.

Richard Parkes Bonington is represented by several pieces and Theodore Rousseau, who I was not that familiar with, impressed me with superb examples.

I was struck in particular by the work of other artists with whom I was only vaguely or not at all familiar, like Théodore d’Aligny, Robert-Leopold Leprince; wonderful work by Alexandre Desgoffe and a stunning landscape painting by Rosa Bonheur (image above, bottom); who I usually associate only with depictions of animals.

The exhibition is wonderful and quite extensive. It runs at the National Gallery in Washington until June 8, 2008. It then moves to the Museum of Fine Arts, Houston for a run from July 13-October 29, 2008. There is a short slide-show of some of the works on the exhibition’s page. There is also a catalog accompanying the exhibit, In the Forest of Fontainebleau: Painters and Photographers from Corot to Monet that has reasonably good reproductions (the Amazon link I give here is to the $60 hardback, there is also a $40 paperback).

If you get to the exhibition, don’t miss the permanent display of Small French Paintings, also in the East wing, which features many of the same painters; as well as more of their work still on display in the main galleries of the permanent collection (not to mention the NGA’s other amazing treasures, like the 3 [or 4, depending on your point of view] exquisite Vermeers…, but I digress).

Link: In the Forest of Fontainebleau: Painters and Photographers from Corot to Monet at the NGA

9 Replies to “In the Forest of Fontainebleau”