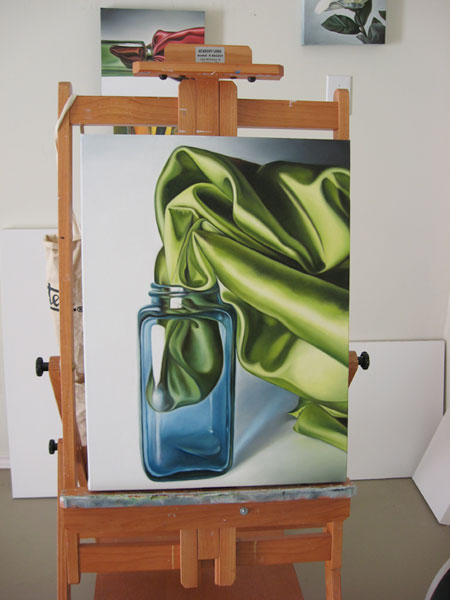 Todd Ford is a painter and art teacher living and working in Texas.

He has some frequent subjects, including a series of paintings of plastic toys (which I didn’t particularly respond to) and a more recent series of liquids and immersed objects in jars, and another of cloth partially inserted into jars (both of which I like very much), as well as the apparent beginnings of two newer series of reflective globes and drapery, and close ups of reflective spoons containing pools or drops of colored liquids (which I’m looking forward to seeing more of).

There is also a slightly older series of close ups of the details of old farm trucks, that I find fascinating for the juxtaposition of the weathered surfaces of painted metal with the smooth, shiny surfaces of glass headlights and chrome bezels.

Ford has both a blog and a web site that feature his paintings.

He takes several interesting tacks at his still life subjects. He has several paintings of broken glass, with close ups of bottle necks and the remains of the bases of broken bottles, rendered with an attention to color and transparency, rendering and finish that might be given to portraits of museum quality glassware.

My favorites are his compositions combining the transparency, color shading and tonal drama of colored glassware and drapery, usually in the form of cloth partially in and partially out of colored jars or bottles. There is also a related series of objects like spoons or brushes partially immersed in liquid in similar jars, that explores some of the same visual territory of transparency, translucency, reflection and refraction.

Ford also has a few paintings with light bulbs, broken, whole and even submerged in liquid in jars, the delve into the same challenges.

I’m particularly fond of some of the recent posts on his blog in which the paintings are photographed in place on the easel, giving you a sense of scale usually missing from photographed works.