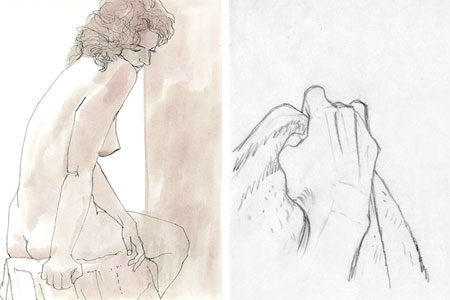 My Father’s Hand is a tribute blog, created by designer Amanda Wray to showcase the drawings of her father, Samuel Wray.

Samuel Wray was a commercial artist in some capacity, though I know little about his commercial work other than that he did some inking and lettering projects for comics, notably for a Robinson Crusoe comic.

The drawings that his daughter has posted are personal, drawings of figures and faces, sketches and self portraits. The postings started in 2006 and are sometimes accompanied by descriptive passages.

Along the way, we get glimpses of the man and his sometimes distant relationship with his daughter, her fascination with his process of drawing and her thoughts on the drawings themselves.

Wray’s drawings are often confident, with solid draftsmanship and a loose, informal line quality. Most are in pencil. He sometimes draws in ink, with tones in wash, and his ink line can be alternately definite or searching. In some of his pencil drawings, as well, he can have a more tentative line, with a delicate quality, seemingly contemplative.

My understanding is that Wray was suffering in his later years from the beginnings of Alzheimer’s, and was in struck by a car a few years before his death. His daughter started the blog about a year before he died, and was offering reproductions of the drawings, the proceeds of which originally went to him and now go to his widow. There is no formal offering of particular reproductions, simply a contact email link.

I assume the ability to purchase reproductions is still in place, as the blog is still on the web, even though Amanda’s posts stop a few days after her father’s passing in 2007.