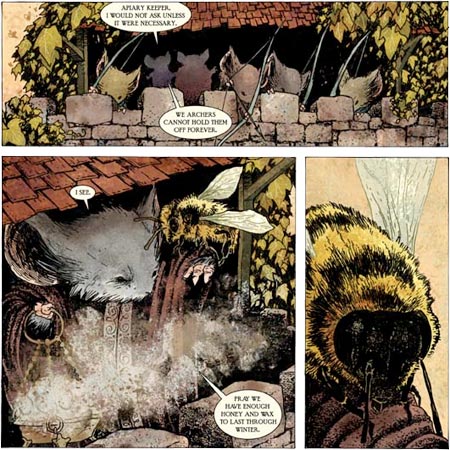 Mouse Guard is a comics series (graphic story) about medieval knights, life in medieval villages and communities, territorial differences, commerce, war, and the harsh conditions that marked life in Europe in the middle of the 12th Century; except that the story is about communities of mice, told almost in parallel, as though this were a history of what was occurring beneath the feet and notice of the actual medieval humans at the time.

Drawn in an illustrative style that would be suitable for children’s books, the stories appeal to adults and are charming and direct in a way that would appeal to children of a certain age (though there is some actual violence, so parents should read through before getting younger kids interested).

The illustration style stands out from most other comics, bearing more relation to pen and ink illustration from earlier times and carrying a nice flavor for the setting and story. Author/artist David Peterson draws the art in traditional ink on bristol board; the coloring looks like watercolor, though I don’t know if it is applied to stats manually or, like most modern comics, applied digitally once the drawings have been digitized.

Peterson also bucked the current market trends with another choice, making his books a different size from traditional American comics (8″ x 8″ instead of 6½” x 10″), which can make it more difficult to get past the mainstream mindset of many comic shop owners (as I know from the personal experience of publishing the print version of my own webcomic in a horizontal format).

Those comic shop owners who do opt to carry the title, though, are finding that they have a comic they can recommend to people new to comics, female as well as male, and of varying ages; something not nearly common enough as the American comic book market struggles to break out if its superhero ghetto.

Peterson’s stories would appeal to the broad audience that responded to the Lord of the Rings movies, with many similar themes and a similar (though more modest) approach to world building, creating a detailed setting in which to unfold his tales.

In addition to stories in keeping with the medieval sword and castle milieu, the mice protagonists face challenges familiar to real mice (owls, scarcity of food), but resolve them in distinctly anthropomorphic ways (swords and slings, negotiation and cooperation between disparate communities).

I find it particularly interesting in the current series that their greatest enemy doesn’t seem to be an evil warlord or ravaging beast, but the Winter itself, very much in keeping with the realities of Medieval life.

Peterson earned a degree in Fine Arts from Michigan University and has a personal web site that includes illustrations, many of which are for children’s books or in a similar style.

Unfortunately, like so many sites for comics and web comics in particular, the official Mouse Guard site seems skewed toward those who are already familiar with the series, and doesn’t do the best job of introducing a new reader to the material. You can actually get a better introduction and overview on the extensive Wikipedia entry devoted to the title.

There is also brief description and several preview excerpts on the Archaia Studios Press site, a nice 5-page excerpt from Mouse Guard: Fall 1152 on the New York Magazine site, and an interview with Peterson on the Silver Bullet Comics site.

The official site does have an introduction to the characters, but in hunting for artwork, you may be misled into thinking there is not much available. There is no “Gallery” section; the Downloads section features small Avatars, but larger Wallpapers are promised as “Coming Soon”.

The For Sale section yields paydirt in the form of pages of original art for sale. Clicking on the thumbnails produces large versions of the original pages. These are presented in the increasingly popular Lightbox JavaScript pop-up, that I find mildly annoying for it’s tendency to make you wait while it resizes the window, but that’s a minor quibble. The Lightbox pop-up does provide the ability to click through the images in sequence (hidden control to the right an left of the image).

As nice as it is to see the original pen and ink pages, this is only part of the art, missing Peterson’s nicely emotive color.

What is not made obvious (and really should be) is that there is a series of terrific 8-page previews linked to the small cover thumbnails on the “Books” page. There are many pages of art here from the sequence of issues that can give you a real feeling for the nature of this original and fascinating series.