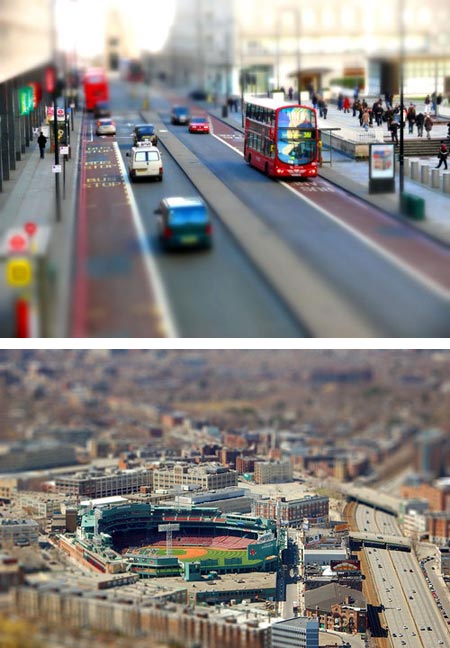 We have a tendency to think of photography as “realistic” because it often seems to reproduce what we see with reasonable accuracy, but photography and human perception often diverge significantly.

You may have noticed when looking at photographs of small objects, models, dioramas or model train layouts, that there is a limited range of the scene that is in focus. This is due to the limited focal length of camera lenses when focused at short distances.

A fascinating practice that has become popular in the last couple of years is “tilt-shift photography”, the use of techniques involving tilting the lens relative to the plane of the scene, often from a high vantage point, mimicking the way small objects are often photographed from above, and using a large aperture (lens opening), creating a shallow depth of field, to produce photographs of real scenes and objects that look like miniatures.

There is a good selection of this kind of photography in a recent article on Smashing Magazine that serves as a nice introduction to the phenomenon if you haven’t encountered it before; and a resource for further investigation if you have. The article also includes some tilt-shift videos and some links to related resources.

It’s uncanny how strong the effect can be. Even when you know the scenes or objects are real, it’s difficult to shift out of the perception that you’re looking at objects in miniature.

Something to think about the next time you’re tempted to refer to a realist painting as “photographic”.

[Images above: Tiltshiftphotography.net and Tilt-Shift Photography: Itâ€™s A Small World After All]