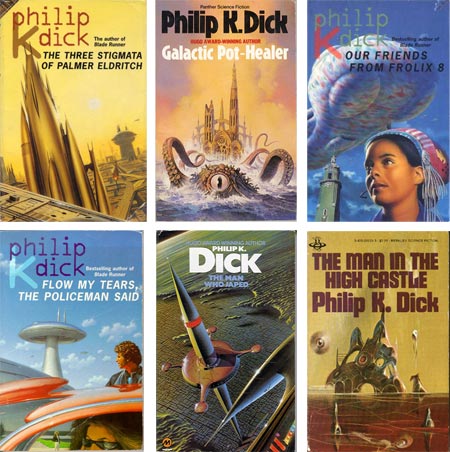 Though I’ve come across it before, the Phillip K. Dick Book Cover Art Gallery is one of the unusual galleries featured in the Museum of Online Museums I mentioned in yesterday’s post.

Phillip K. Dick was a science fiction writer active in the mid Twentieth Century, noted for his eccentric and um… original viewpoint. Though perhaps not the best writer in the sense of well-structured prose, his unique ideas and flights of bizarre imaginings set him apart and made him a favorite of many (myself included).

There have been attempts to translate a number of his books into films, most of them about as successful as returns from the hilarious game he suggested back in 1969 in his novel Galactic Pot-Healer, of translating famous phrases from one language to another and back, say from English to Japanese to English, and letting others try to guess the phrase from its mangled translation.

(The actual ability to do this eventually became practical with the advent of online translation services like Babel Fish and Google Translate, and we used to have fun with it a few years ago, but it’s actually become more difficult lately as the translation programs have gotten much better.)

Blade Runner, adapted from Dick’s Do Androids Dream of Electric Sheep?, is the best of the movies made from his novels, but is more Ridley Scott’s vision than Phillp Dick’s. I’ve long thought that the best cinematic adaptation of the ideas of Phillip K. Dick (and William Gibson), though not a direct adaptation of a work by either author, was the original Matrix movie (you know, the good one).

As more movie adaptations have been made and interest in Dick has been revived, a number of his books have been reissued (again), and there is now a long list of various versions, editions and translations from the last half century or more.

A large number of these (though certainly not all, yet) have been gathered in a cover gallery on the phillipkdick.com site. Though the list of links is text rather than thumbnails, it’s easy to look through them if you’re using a modern tabbed browser, by Command-clicking (Mac) or Control-clicking (Windows) to open multiple links in additional tabs.

Some of the cover illustrations (particularly on one recent series of reissues) are very good, others are varying degrees of good, mediocre, terrible, worse than bad and just plain bizarre.

Many have nothing whatsoever to do with the story, but look great anyway, like the cover at top, left for The Three Stigmata of Palmer Eldritch (one of my favorite Dick novels, a psychedelic black hole of recursive paranoia that leaves you wondering “How did anybody even think of this?). (Side note to fans of David Cronenberg’s films, look for the nod to the influence of Three Stigmata in the form of fast food from Perky Pat’s in one scene of eXistenZ.)

I won’t go into Dick’s personal life, which is in some ways even stranger than his novels, but there is a wonderfully bizarre graphic story (i.e. comics) account of The Religious Experience of Philip K. Dick by Robert Crumb from Weirdo, readable online.

If you’re new to Phillip K. Dick and curious to read something of his, I recommend Ubik (currently being adapted for film) or Man in the High Castle as places to start.

There is a compendium of four of his better known novels, Philip K. Dick: Four Novels of the 1960s: UBIK, The Man in the High Castle, The Three Stigmata of Palmer Eldritch, Do Androids Dream of Electric Sheep?.

You can very often find Phillip K. Dick novels, frequently with interesting covers, by digging around in second hand book stores; a wonderful way to come across odd treasures.