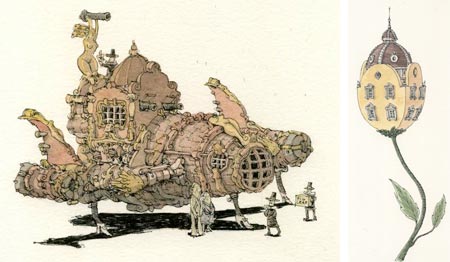 Mattias Adolfsson is a 3D artist living outside of Stockholm, Sweeden and currently working for gaming developer Simbin Development Studios.

Having apparently put aside traditional drawing for a while, Adolfsson returned to regular drawing when he started his sketchblog Mattias Inks, in 2006. Since then he has populated it with a wonderful and fast growing assortment of whimsical drawings on a variety of subjects and themes.

Usually drawing with a Namiki Falcon fountain pen and Noodler’s American Eel ink, and often in the pages of Moleskine sketchbooks, Adolfsson draws charmingly offbeat characters, animals, robots and architectural fantasies, as well as more straightforward sketches of his surroundings.

He often fills out his drawings with watercolor to varying degrees, usually with light touches that leave the feeling of the ink drawing intact.

For someone who has only been drawing recently for a couple of years, Adolfsson has been prolific; his Flickr galleries go on for dozens of pages.

He also has a web site with galleries of his drawings, doodles and sketch books; as well as an Etsy shop in which he sells original art.

One of his excursions into fanciful imaginings is his interpretation of “Star Wars, the baroque version” (expanded page version here), with a curly-wig helmeted Darth Vader, blunderbuss and balloon-pak equipped Bobba Fett, and Han Solo being harassed by the puritan police at the base of his eminently baroque Millennium Falcon (top, left).

Mattias Adolfsson is giving a workshop in drawing this July 29-31 (more information here, in Swedish); and is currently working on a children’s book titled Till mitt barnbarn.