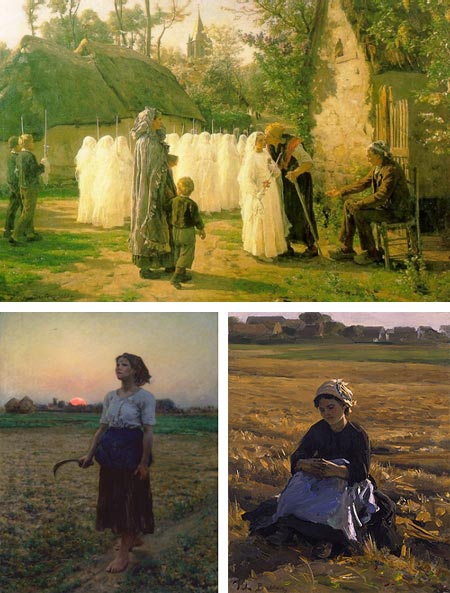 Jules Breton, whose full name is Jules Adolphe Aimé Louis Breton (what, no hyphens?), was one of the most famous and in demand academic painters of the 19th Century.

He fell into disregard and semi-obscurity in the 20th Century, suffering particularly at the pens of Modernist critics who deemed him one of the terrible academic painters from which Modernism was here to “save” the spirit of pure art.

Though he started as a history painter, for the majority of his career Breton largely devoted himself to images of peasant field workers, seasonal laborers at the bottom of the social ladder, toiling in the fields.

His subjects are represented with sympathy, but his fields are idealized, glowing seas of grain bathed in late day sun. He also portrayed other elements of village life, as in The Commuincants (above, top).

He studied at the Academy of Fine Arts in Ghent, and later in Paris at the atelier of Michel Drolling.

Breton focused in later years on compositions of single female workers, posed in sunlit fields, a genre that proved highly popular with buyers in the U.S. He became highly regarded and his work in demand in the UK and the U.S. as well as his native France.

His later paintings moved from realism to a poetic vision more in keeping with Symbolism. His painting The Song of the Lark (above, bottom left) was the source of the title for Willa Cather’s famous novel.

Reportedly, Van Gogh at one point walked 85 miles to try to meet him, but was put off by Breton’s high wall and never contacted the elder artist.