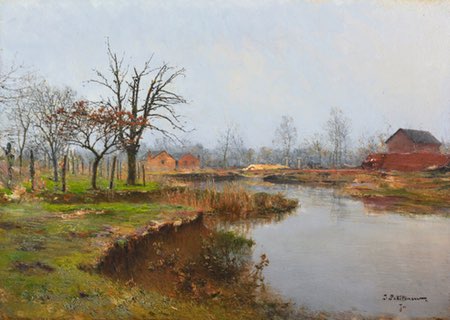 Active in the late 19th and early 20th centuries, Ivan Pavlovitch Pokhitonov was a Russian/Ukrainian painter who spent the greater part of his career living and working in France and Belgium.

Though he also painted portraits and still life, he is noted for his landscapes. Influenced by the French and Belgian painters around him, Pokhitonov’s landscapes took on qualities that had critics referring to him as the “Russian Barbizon painter”.

Aside from some classes in drawing and watercolor during studies of other subjects at Odessa University, and a stint working for French Symbolist painter Eugène Carriè, Pokhitonov was largely self-taught.

Most remarkable, perhaps, after seeing reproductions of Pokhitonov’s paintings, is the realization that they are essentially miniatures. Rather than being 30 x 40 inches or larger, as I might have assumed, it appears that most of them are in the range of 6 x 10 inches (15 x 25 cm).

Pokhitonov worked on his small paintings with unorthodox tools, reportedly using magnifiers, scalpels, fishbones and other objects to enable small marks and textural effects. A number of his works are “cinematic” in aspect ratio, and many feature prominent horizons that might threaten to divide the canvas in two vertically, but are always kept in check in the context of his artfully balanced compositions.

Many of his contemporaries were impressed with his naturalism and painting skill, some even referring to him as a “sorcerer” or “magician”.

Russian great Ilya Repin, after slogging disappointedly through the 1894 Paris Salon, remarked that his only pleasure after “all this torture and wandering through endless exhibition rooms was the opportunity to have a rest in front of the miniature gems of our I.P. Pokhitonov”.