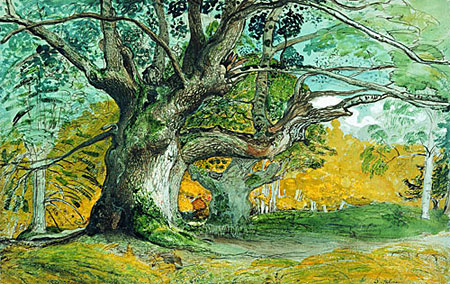 Artistic approaches to landscape can be as fascinatingly varied as landscape itself. The variety of style, material, color, medium and technique is amazing. Samuel Palmer’s landscape paintings in oil, watercolor, gouache, ink and sepia wash often have a unique character that feels like fantasy or children’s book illustration, particularly work from a period when he was heavily influenced by the Romantic artist/poet William Blake.

Palmer met Blake through English landscape artist John Linnell, who was something of a mentor to him and whose daughter, Hannah, became Palmer’s wife. Palmer’s own family was less than an asset. His father had an unfavorable reputation and a poor economic situation, putting pressure on his sons to restore the family name. One of Palmer’s brothers, finding himself without funds while Palmer was away on his two-year honeymoon/painting expedition to Italy, pawned most of Palmer’s early work and Palmer had to pay out a great deal to get it back. Palmer’s son, Herbert Palmer, apparently burned large amounts of his father’s work after his death, ostensibly so it would not be disrespected (and you think you have family troubles as an artist).

Palmer never saw great commercial success as a painter and most of his income came from teaching drawing, at which he was apparently quite good. Palmer’s work fell into semi-obscurity for many years and has only recently been re-discovered by the art world.

In 2005 the British Museum and the Metropolitan Museum of Art cooperated to create the first major retrospective exhibition of Palmer’s work, Samuel Palmer: vision and landscape, which helped re-establish him as one of the most important landscape painters of his era. It ran at the British Museum from October 2005 to January of this year and is currently running at the Met until May 29, 2006. The British Museum site still has the section devoted to the exhibition online here. The Met’s section is here. Both have examples of Palmer’s work in several mediums.

“Success” is almost as subjective a concept as “style”. Midway through his career, Samuel Palmer consciously changed his style to a more traditional landscape approach in a failed attempt to make his work more salable, but it is for his visionary Romantic work that he is remembered and revered. He may not have found any greater financial success had he remained true to his original vision, but would he perhaps have found a greater level of personal success? All artists have to find their own meaning for that word, but I think Palmer’s success was in creating unique landscape images that we still find engaging and visually rewarding after 200 years.