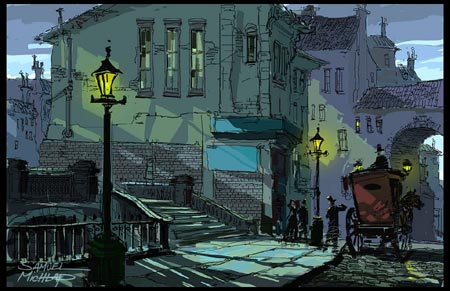 One of the really great trends I’ve noticed in the past year is an increase in the number of animators, production designers, storyboard artists and character designers who are keeping blogs, posting their work and often discussing their creative process.

Samuel Michlap has been a layout artist, art director and production designer, working for companies like Disney and Dreamworks. He has worked on films like The Lion King, Sinbad, Shark Tale, Eldorado and The Hunchback of Notre Dame.

He works in acrylic, gouache, and, when time allows, in oil, as well as working digitally in Photoshop. Some of his comps are done in Prismacolor pencil on a heavy toothed board.

He has just recently started a blog, featuring some of his professional work as well as sketches and quick studies, including work done in front of the TV or while riding in the car.

His blog is not currently linked to his web site, which appears to be under construction but still has some of his figurative and gallery work. You can also find some of his gallery paintings, with a nice emphasis on trains from the mid 20th Century, in the Howard Manville Gallery site.

Through the variety of his work, you will find a broad variation in approach in terms of texture, brush handling, composition and overall palette. You will find consistency, however, in his deft handling of color and value. He controls mood, light, the focus of attention with careful color relationships that are sometimes subtle, sometimes bold, but always effective.

I particularly enjoy his evocation of 19th Century Paris (image above), done after visiting Paris while working on Disney’s Hunchback of Notre Dame.

(I just have to take an aside here and say I would have loved to have been at the meeting where somebody pitched the idea for that movie. “It’s the Hunchback of Notre Dame, see, except without so much… well, tragedy.. instead, it’ll be a musical! Right! …with singing gargoyles…” Hello?!)

Anyway, Michlap’s blog is still new, he just started in April, and there isn’t a great deal posted yet, so you may want to bookmark it and stop back to watch for more. I know I will.