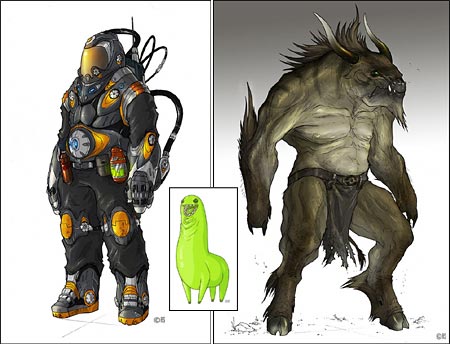 St. Goddard’s site showcases his designs for environments and characters (like the hazard-suited character above left), but the stars of his oeuvre are his nicely scary creatures (like the minotaur above right).

The site also features a step-through (not exactly a tutorial) of his coloring process and promises a similar feature for his drawing process in the near future.

St Goddard seems to work primarily digitally, drawing and painting his characters and environments in Photoshop. He also works in 3-D applications.

His approach is generally one of color-filled linework, rendered far enough to give a relatively finished painted appearance. This gives his exotic creatures and wild characters a degree of realism while keeping the loose feeling of a drawing.

There is a brief interview with him on Animation Arena.

St. Goddard is also the creator of Bunchies (inset) which are um,.. animal creature kind of thingies that have become something of a phenomenon on the Web.