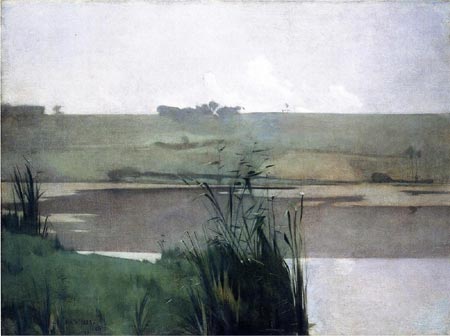 Like Edmund Tarbell, John Twachtman is usually labeled an “American Impressionist”. Also like Tarbell, that essentially means he took what he liked from French Impressionism and generally went his own way.

In Twachtman’s case, what he took was the light and atmosphere, the fascination for brilliantly lit landscape, the free and direct application of paint and the rich color captured by painting en plein air.

What he left out were the separate dabs of pure color, “optical color mixing” and Impressionist theories, substituting instead a fascination for the texture of roughly applied brushstrokes, scumbled pigment, drybrush effects and large blocks of color that presaged Cezanne’s eventual trek up the mountain of abstraction.

Twtchman’s approach varied throughout his career and reached in both directions through time. His palette was often darker than the French Impressionists, owing more to Courbet than Monet, and his Whistler-influenced masses of soft color reached past Impressionism to what would later be called “Post-Impressionism” and knocked on the door of Modernism.

Twachtman was born in Ohio and studied with Frank Duveneck. He traveled to Europe with Duvenek and William Merrit Chase, studying in Munich, Venice and Paris, where his paintings took on the soft look sometimes called “tonalist” as in the beautiful example above, Arques-la-Bataille, now in the collection of the Metropolitan Museum of Art in New York.

After returning to America, he settled in Connecticut, married and spent many years painting his own house and gardens. He was good friends with J. Alden Weir; and along with Weir, Childe Hassam, Frank Benson, Edmund Tarbell and others, formed the “Ten American Painters”, a loose alliance of Impressionist-influenced painters, mostly in New York and Boston, who were linked primarily for their desire to push outside the bounds of traditional art.

I don’t know of any individual books on Twachtman that I can recommend, although you’ll find him in books on American Impressionism.

As you look through Twachtman’s paintings and graphics (he was an accomplished etcher), don’t be too quick to judge whether you like his work until you have sampled it from several points in the history of his many stylistic reinventions.

Twachtman was restless in his approach, but his paintings can be the essence of tranquility.