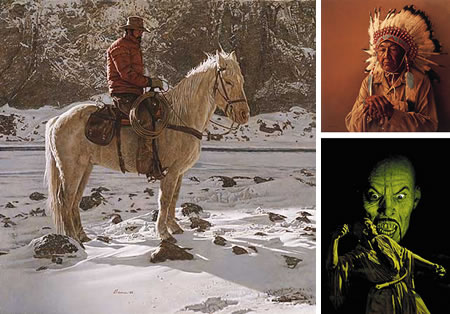 I first became impressed with the work of James Bama when I encountered his dramatic covers for the paperback versions of the Doc Savage pulp novels. (Doc Savage was an interesting pulp character that I think influenced modern superheroes in a big way, i.e. Superman = Doc Savage + Flash Gordon, and Batman = The Shadow + Doc Savage + Dick Tracy; but, I digress…)

Bama did a long series of those wonderful covers, with their melodramatic lighting and intense color, portraying the hero amid fiendish villains and horrific monsters, all rendered in a superbly accomplished realism that made them jump off the cover.

Bama had 20-year plus career doing illustrations for books, movie posters and magazines like The Satuday Evening Post, Argosy and The Reader’s Digest, and even did the covers for Aurora’s famous monster model kits.

At one point he changed course, moved from New York to Wyoming, and moved from a career as an illustrator to a new career as a gallery artist pursuing a fascination with the contemporary American West.

His work since then has concentrated on western character studies — portraits of cowboys, contemporary American natives in formal or casual dress and studies of the Montana wilderness. His sharp focused realism brings these subjects to life with a masterful touch.

There is a new book just released by Flesk Publications, (a terrific small art publisher that I have written about before), titled James Bama, American Realist, that features a great mix of his western art and his illustration (including all 65 Doc Savage covers).

The JamseBama.com site is mostly a catalog of available posters, but the poster previews make a good gallery of his recent paintings. I’ve added other links below to galleries that handle his work.

One Reply to “James Bama”