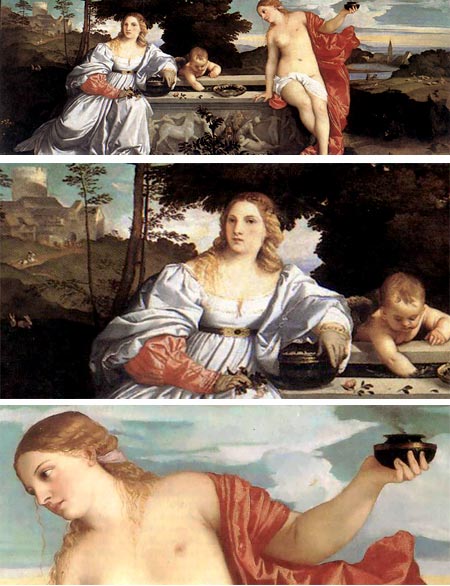 Many artists, though certainly not all, are obsessed with beauty. Titian, also known by a number of other names, but most properly Tiziano Vecellio, was obviously one of them.

In addition to his desire to create works of great beauty, which he certainly did, was his fascination with the physical beauty of idealized women, as realized in his many canvasses of the goddess Venus. Beyond that, however, seemed to be a fascination with the fleeting nature of beauty and how our obsession with it dominates us.

His famous masterpiece, Sacred and Profane Love (above), which I’ve had the pleasure of being dazzled by in the Borghese Gallery in Rome, was incorrectly titled in the late 18th Century and interpreted to elevate the spiritual above the base concerns of the flesh (“profane love” meaning vanity, not sex). Modern Americans might also look at the painting and mis-identify the figures based on misguided ideas of propriety.

The painting was commissioned to celebrate a marriage. It is the clothed figure of the bride, sitting on a sarcophagus carved with the crest of the of the groom’s family, that represents the Earthly and temporal. Prior to the marriage, she is visited by cupid and Venus herself, who carries the eternal flame of God’s love and represents the sacred and eternal. Rather than condemning one and extolling the other, the painting actually glorifies both aspects of love. These were warm-blooded Italians in the flowering of the Renaissance, not the dour English Puritans from whom we Americans inherited much of our “morality”.

Titian knew that beauty was fleeting, though, and often played with the themes like the Worship of Venus and vanity.

Titian was an enormously influential artist. Rembrandt used one of Titian’s portraits (possibly a self-portrait) as a model for the composition of one his own self-portraits. Rubens copied his compositions, and many other great artists, at the time and subsequently, have been dramatically influenced by his refined color, sweeping compositions and masterful handling of the medium of oil paint. Titian was one of the first to use the medium on canvas rather than on boards.

It’s difficult to tell from the reproductions available on the web, but Titian’s rich, subtle colors were both smoothly blended and applied with ground-breaking visible strokes that presaged the work of later painters. In his later work, however, he seems to almost regress, losing the boldness of his color and adopting a more subdued palette. This may have been an emotional response to the death of his wife.

Titian is almost always mentioned with two other great Venetian painters, Bellini and Giorgione, his teacher and collaborator, respectively. Both are worth investigating if you have the time.

There are a number of Titian’s works on view at museums here in the US, you’ll find many of them listed on Artcyclopedia. (Several pieces from the NGA are currently in Vienna.)

Sacred and Profane Love is not on loan and still resides in the Borghese Gallery in Rome. Collector Sciopione Borghese bought the painting in 1608.

In 1899 the Rothschilds offered to buy Sacred and Profane Love for a sum that was greater then the acknowledged value of the entire Galleria Borghese and all its works.   The offer was refused.