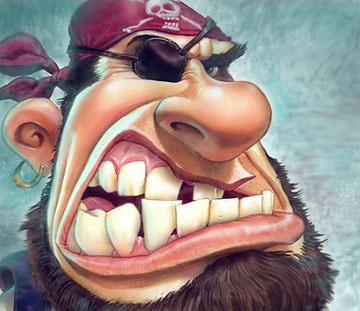 There is a style in illustration, particularly advertising illustration, in which exaggerated, cartoon-like drawings are rendered in detailed style usually applied to more realistic images. It’s a nice idea that is harder than it looks and consequently rarely done well.

Gary Locke is one of the few illustrators who gets it right. His wonderfully exaggerated figures, usually in comically theatrical poses, have just the right degree of distortion, rendering and draftsmanship to gel into a whole that works. He even gets me to enjoy the big head/small body caricature style, a form I usually dislike.

There is also a sketchbook section, with more quickly rendered drawings that let you see the draftsmanship that underpins his more rendered images. The more finished images are created in watercolor and “mixed media” (I suspect gouache among other things).

His advertising clients include 7-UP, Pepsi, Warner Bros., Coca-Cola, RadioShack and Fisher-Price and he has done editorial illustration for publications like Time, Sports Illustrated, Sporting News and U.S. News and World Report.

Note: After being off-line for several days from, ironically, the morning of the post, Locke’s site is up and running again.