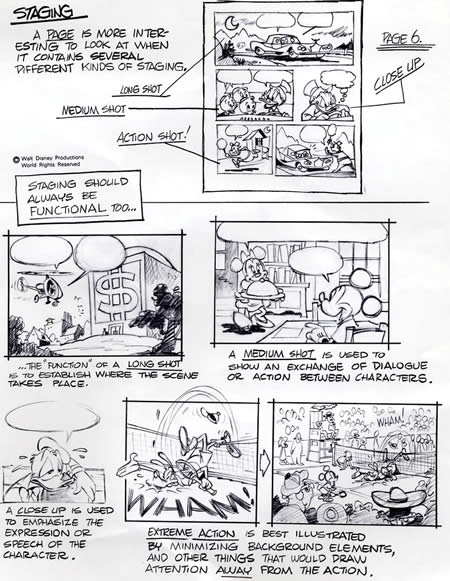 Most people think of comics as simply a series of illustrations, and of the skill involved as essentially one of drawing.

An important part of that skill set is a subset dealing with the design and layout of comics panels. Here is a link to a great resource for anyone interested in comics storytelling, or its close relative, movie and animation storyboarding.

Mark Kennedy, on his blog devoted to storyboarding, Temple of the Seven Golden Camels, which is itself a great resource, has posted a wonderful 7-page feature called Comic Strip Artist’s Kit, by Disney comic book artist Carson Van Osten.

Van Osten went to the Philadelphia College of Art (now the University of the Arts) here in Philadelphia. He was also a musician and played bass in the legendary Philly 60’s bands Woody’s Truck Stop and The Nazz (Todd’s Rundgren’s original band).

He later went to work for Disney Studio’s comic book department, writing and drawing Mickey Mouse and Goofy comics for distribution in Europe. He then moved to their American comic strips department, worked with Floyd Gottfredson on the Mickey Mouse daily newspaper strip, became the art director of the department in the 80’s and 90’s and, as far as I know, continues to do work on various Disney comics.

In 1975, as part of a slide presentation for a Disney meeting in Frankfurt, he drew up some sheets on common problems in comics layout and staging. It was so well received that the company printed 2000 copies and distributed it to all Disney offices. The sketches also were used in the book The Illusion of Life: Disney Animation by Ollie Johnston and Frank Thomas.

Copies of the sheets, which are a terrific primer on the principles of staging and layout in comics and storyboarding, have generously been made available on the web. Carson saw a mention of the pages on Kennedy’s storyboarding blog and sent him large copies, which he has posted in versions at a high enough resolution to be really usable and printable.

Even if you’re not interested in creating comics or storyboards, take a look for a fascinating glimpse into some of the “hidden art” of visual storytelling.

Links via Metafilter and Drawn!