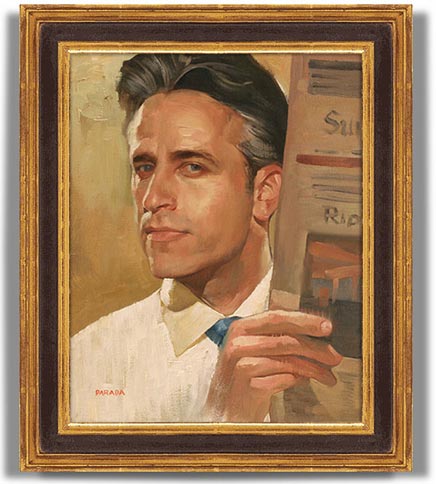 Roberto Parada is an American illustrator who specializes in editorial illustrations with portraits of rock music luninaries, sports stars, movie and TV personalities and political figures.

At times his portrait images are quite straightforward, like his straight-on takes on John Stewart (above) or Michael Caine. Often, though, there is a nice twist or bit of wry commentary, like his portrait of Gary Shandling as Moby Dick (the whale, not Ahab), Jack Black as a Shakespearian actor in his Nacho Libre garb, or George W. Bush as Nero.

Parada can also be quite funny, and his paintings often make reference to art history, as in his “portrait” of Homer Simpson as a real person, as if painted by Andrew Wyeth, and his hilarious portrait of Canadian Billionaire Ken Thompson posed with his dog as a send-up of Da Vinci’s Lady With an Ermine.

Parada was born in a New Jersey suburb of New York and studied at the Pratt Institute in Brooklyn. He started his career working in acrylics but gained the confidence to switch to oil by talking with illustrator Tim O’Brien.

Parada’s paintings in oil can be smoothly blended or, as in the case of the John Stewart image, quite painterly. (There is nice big reproduction of that image in the July 2006 Communication Arts Illustration Annual.)

In addition to the galleries, his web site features a selection of prints that can be ordered, and that section also includes images that are not seen in the other galleries. You will also find images painted from life in the Studio section.

In the About section of his site, Parada tells of his encounter at age 33 with a life threatening condition known as Severe Aplastic Anemia, or severe bone marrow failure. After undergoing drastic treatments of aggressive immune surpression, he was the fortunate recipient of an anonymous donor bone marrow transplant. The News page tells about his eventual meeting with the donor who saved his life.

A personal note: Although I don’t have any first hand knowledge of bone marrow transplants, I am myself the fortunate recipient of a kidney transplant (14 years as of last September), and I encourage you to take a look a the links that Parada provides to the National Bone Marrow Donor Program and other resources.

You may have also noticed my constant links on the lines and colors right sidebar to the Donate Life site, and the Gift of a Lifetime site. The latter is a fascinating web documentary on organ and tissue donation. I was glad to be a member of the team, coordinated by FusionSpark Media, that created this site. I did the illustration and programming for the Flash module called The Interactive Body, which uses animation and interactivity to inform about the organs and tissues that can be transplanted. There is also information on the Gift of a Lifetime site about bone marrow donation.

One Reply to “Roberto Parada”