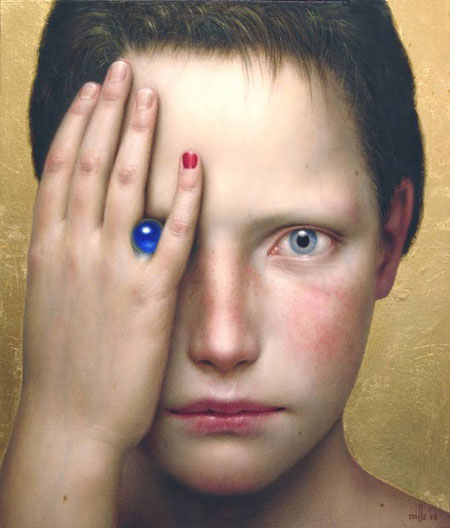 I’ll start by suggesting that the paintings of Spanish painter Dino Valls are not for the faint of heart or easily offended; and I’ll be back tomorrow with something more lighthearted if you care to return then.

Though they contain little in the way of outright violence, and may seem mild in a culture inured to slasher films and gore-soaked video games, Vall’s paintings are overflowing with disturbing suggestions of pain, isolation, physical discomfort and psychological distress (I’ve chosen one of the most innocuous to display here).

For example, in his painting Martyr, the bust of a young woman appears to be a true bust, stopping below the shoulders where it apparently sits on a red cloth surface. A pair of hands casually rest on the surface in front of her. There is no blood or indication of violence, yet the hands can only be hers if they are separate parts. She has a halo behind her head, medieval style, in the form of a circular saw blade.

I don’t profess to understand the conceptual basis for Valls’ painting, which is obviously some kind of statement about the dark side of the human condition, nor do I find his images appealing in terms of what they portray. I can’t help but respond, however, to the the extraordinary level of skill with which they are painted.

The subjects of his paintings, usually young women, occasionally young men, are portrayed with an uncanny immediacy that makes their presence in his disturbing imagery even more emotionally resounding.

Valls’ paintings are painstakingly crafted with the application of layers of tempera over which he lays transparent oil glazes. His technique is steeped in the traditions of old master Dutch and Italian painting, which he has studied extensively.

Vall’s also has a thorough knowledge of human anatomy. He trained as a medical doctor and surgeon before turning to painting full time. You can see the influence of his medical training in his subjects as well. There are often portrayals of cold, vaguely threatening medical instruments, young men and women being poked an prodded by the hands of unseen manipulators, measured with calipers, or even dissected. In his painting Noxa, a red shroud is pulled open with medical clamps, as if a surgical opening in a body, through which one of Valls’ rosy young faces peers while being lighty poked by a photograph, also held in a surgical tool.

The common theme I take away from his work is the treatment of people, and their parts, as objects. Body parts, arms, legs, hands, heads, are treated as parts, as if pieces of department store dummies or sculptural casts, but painted as very much living flesh. These suggestions are mixed with medical imagery, religious iconography, references to medieval and Renaissance painting and an undercurrent of sexuality, though the latter seems more intended to disturb than to arouse.

His young subjects are often represented as if their bodies are intersecting with objects, one another, or with stone floors. Bodies intersect with themselves in siamese twin fashion, or as in some unfortunate accident of space and time in which they are merging or being separated.

Through it all, the expressions on the beautifully, almost lovingly painted faces are not indicative of torture, but at most appear vaguely disturbed, as if recently scolded or informed that they have been assigned an onerous task. In fact, it is his faces that are sensual, where his portrayal of nude figures is actually less so and feels (to me at least) clinical.

His faces, particularly those of young women, are painted with extraordinary finesse and uncanny attention to intimate details, like small creases of skin near the eyes, delicate indications of freckles and moles, and the presence of extra blood vessels near the surface of the skin expressed as rosy cheeks and ends of noses, accented by pale skin elsewhere, as if trying to emphasize that they are very much alive in contrast to the way they are portrayed as objects and parts in the paintings.

According to some of the critical essays quoted on his site, Valls does not paint from live models or even photographs, but invents his figures; which I find remarkable because he manages to paint his figures, and particularly faces, with a kind of immediacy and tactile vibrancy that makes them emotionally visceral.

There are a few of his paintings for which I do like the subject matter as well as the technique, showing rooms in which the perspective and geometry of space are distorted, but for the most part, his images are haunting and disconcerting, but powerfully painted.

Note: the site linked here contains images of nudity, suggestions of sexuality and violence and is Not Safe For Work. Avoid it if you’re likely to be offended.