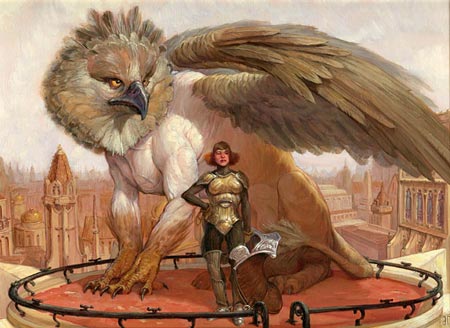 Adam Rex is an illustrator living here in Philadelphia who does fantasy themed and children’s book illustration for clients like Harcourt, Penguin, Knopf and a number of periodicals. Rex received the the Jack Gaugan Award for Best Emerging Artist, named for the noted Science Fiction artist, in 2005. He has also done a number of imaginative illustrations for Wizards of the Coast’s Magic: The Gathering collectable card game.

He often employs brusque textures and mottled patches of color to give his images a rough-hewn appearance. Edges are deliberately left ragged and thin layers of color are scumbled against background colors. At other times, when the subject calls for it, the finish is more refined, though never to the point of being without some suggestion of texture.

His fantasy genre paintings frequently feature complex compositions with intricate backgrounds and multiple figures, and often carry a suggestion of Renaissance settings as in “Novice Griffin Rider” (above).

The galleries on his site feature examples of his work sorted by genre, Kids, Bigger kids, Teen/Adult and Fantasy. There are additional illustrations on the page that lists some of the books he has illustrated. (You can also find many of them with an Amazon search.)

Rex works mostly in oils, often over acrylic and opaque ink backgrounds; but he occasionally uses gouache, brush and ink, scratchboard, even Sculpey modeling, and a few digital touches, as in his bestselling children’s book, Frankenstein Makes a Sandwich (which is actually titled Frankenstein Makes a Sandwich and Other Stories You’re Sure to Like, Because They’re All About Monsters and Some of Them are Also About Food. You like Food Don’t You? Well, All Right Then).

His work for children’s books, including Tree Ring Circus, another for which he is the author a well as illustrator, carry forward that feeling of rough edges and also seem to have a hint of strangeness, as if to say that life has rough edges and we should revel in it rather than denying it with glossy fantasy.