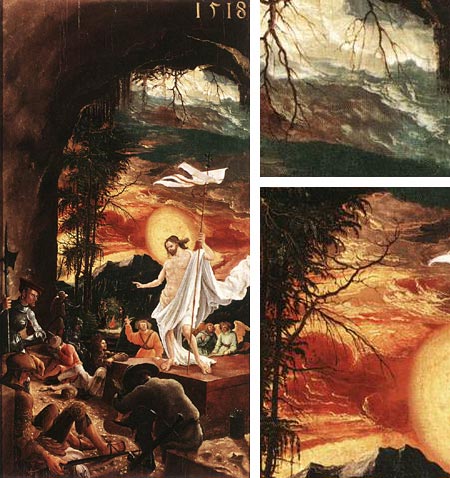 Easter celebrates the Christian ideal of resurrection and rebirth; its setting in early Springtime (and association with fertility symbols like rabbits and eggs) carries forward the idea of new beginnings and the power of nature. It’s also the time of year associated with Cecil B. DeMille’s Hollywood spectacles, with their attendant special effects and thunderously dramatic skies.

Put together the resurrection of Jesus, the power of nature and spectacularly dramatic skies and you get Albrecht Altdorfer’s The Resurrection of Christ.

Altdorfer was a Germain painter and printmaker who was more or less contemporary with Albrecht Durer. Though not Durer’s equal (who was?), Altdorfer was one of the most accomplished and influential painters of the time. Even though he painted mostly religious works, he was intensely interested in landscape, and is credited as the first major artist to bring landscape to the fore as a subject for painting in and of itself.

His fascination for landscape and the power of nature carried over into his religious paintings, where great attention is given to the natural settings for many religious events. In particular, I have always been struck by his dramatic skies, which would have done well as examples for ILM in their special effects skies for Close Encounters of the Third Kind and Raiders of the Lost Ark.

In his Resurrection of Christ the skies around Christ’s golden halo boil with brilliant reds and yellows, while above, framed by the dark arch of rock, the parting darkness is more suggestive of a storm-tossed sea than mere darkened clouds.

For another great Altdorfer special effects sky, along with a sweeping landscape and a cast of thousands, see his remarkable Battle of Alexander.

Altdorfer was also renowned as an engraver and creator of woodcuts, and was particularly noted for his miniature engravings, many of which were only an inch or two on a side.