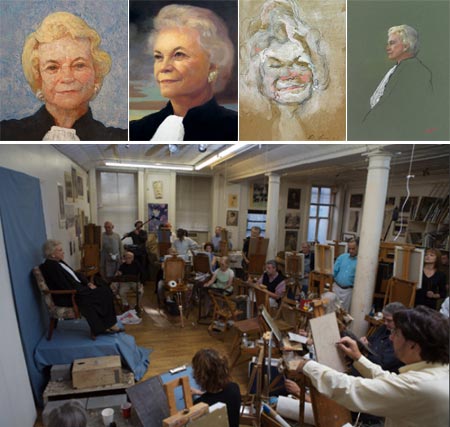 For many years I have been going, on and off, to open figure drawing and painting sessions here in Phliadelphia at either the Philadelphia Sketch Club or the Plastic Club, two of the country’s oldest arts organizations.

These are not classes, per se, with a set course of instruction, but simply sessions where artists jointly pay a model fee and are free to pursue figure drawing or painting in the medium of their choice. The sessions consist of a series of long and short poses, usually over three hours or so; and there is no requirement to sign up for a formal class. You can attend when it’s convenient. Hopefully, you have access to similar sessions in your area (they are sometimes part of the continuing education offerings of art schools).

There is a somewhat similar artist organization, or club, in New York called the Painting Group. It’s a little different from most in that it has a closed membership and is led by the renowned caricaturist and watercolorist David Levine, and the highly regarded portrait painter Aaron Shikler, who counts among his portraits the official portraits of John F. Kennedy Jackie Kennedy and Nancy Regan. They have been meeting regularly as a painting group for over 40 years.

Last October Supreme Court Justice Sandra Day O’Connor sat for the group in a unique full-day portrait session, resulting in a fascinating situation in which 25 artists painted her portrait at the same time. You may have seen mention of it on the CBS Sunday Morning magazine show a few weeks ago.

There is a slideshow online on the NPG site of seven of the portraits and a couple of photos of the session.