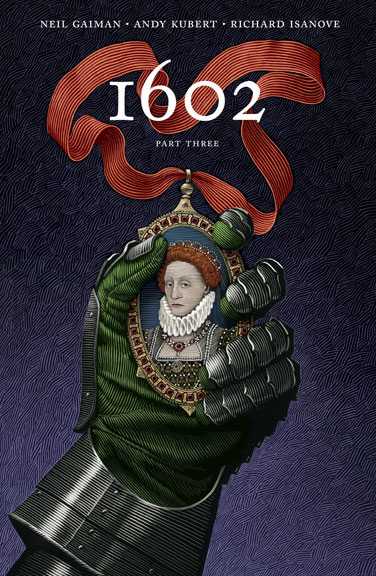 Well, my friends, here is yet another tantalizingly different artist about whom I could find very little information without having to dig.

I first encountered Scott McKowen’s work in the form of his wonderful set of covers for the Marvel Comics limited series 1602 (in which Marvel superheroes are envisioned in that time period, and are of course assumed to be witches, among other things). As is common practice in American comics, the cover and interior comics pages for this series were done by different artists, and, as much as I like the work of Andy Kubert, who did the artwork for the series, this is one of those instances where I bought the comics for their covers (image above).

These are unlike any comic book covers I can think of, before or since, and look more like wood engravings than comic book illustration (making them perfect, of course, for the setting of the series). They are in fact drawn in scratchboard, a style of pen and ink rendering in which white lines are scratched with sharp instruments from areas of black ink that have been applied to clayboard. (See my posts on Virgil Finlay, Elizabeth Traynor and Mark Summers.)

The appearance of this traditional looking approach, which McKowen has used in the style of wood engraving book illustrations, works remarkably well when combined with digitally applied color.

He does not seem to have a web presence of his own, but McKowen is represented by the Marlena Agency, who has fortunately supplied an online gallery of his work. There in no bio information, however.

A search on Amazon provided more information than the rep’s site. McKowen has illustrated a number of books in a series of Unabridged Classics, including Frankenstein, The Wonderful Wizard of Oz, The Adventures and Memoirs of Sherlock Holmes, Gulliver’s Travels and Alice’s Adventures in Wonderland.

These editions include some interior illustrations by McKowen, though the reviews indicate they are sparsely illustrated. If you like his work and are frustrated by the limited amount of material on his rep’s site, you may find it worthwhile going through the Amazon listings to look at the enlargements of the covers (or, of course, looking for the books in your local bookstore).

I also found out through an editorial review on Amazon that McKowen and his wife Christina Poddubiuk operate a company that specializes in design and illustration for theater and performing arts called “Punch & Judy, Inc.”, though it apparently has no web presence either. Their projects often involve historical research into period costumes and settings, leading us back to McKowen’s ability to create an wonderfully appropriate look for illustrated classics, or even a superhero period piece.