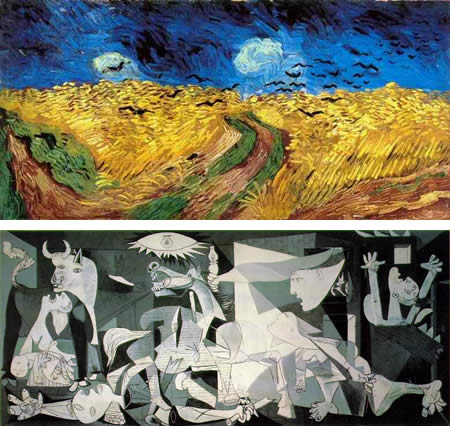 The Power of Art is a new PBS series, based on the book by Simon Schama, and made with his cooperation and participation.

In a series of eight broadcasts, the program will examine eight artists and their impact on the history of art, and on the cultural, political and social currents of their time. In the process, the shows will apparently focus on one painting by each artist that the author considers particularly significant and explore that work in depth.

I learned about this series from Nita Leland’s Exploring Color and Creativity (I reviewed her recent book The New Creative Artist back in February.) While I have not read the book on which the series is based, Leland has. She mentions it here and in her post on the PBS special notes that it is the emphasis on the social, political and business aspects, which are not often brought to light, that she found most intriguing.

To me, throwing someone like Rothko into that group is like doing a special on Mozart, Bach, Beethoven and Brahams and tossing in Axl Rose, but I’ll try to bite my tongue and bear in mind that perhaps the political and social implications are more important here than the accomplishments of the artists. I won’t know until I’ve seen the program.

The first installment of the series starts tonight, Monday, June 18th at 9PM Eastern on most PBS stations, and is devoted to Van Gogh. It will be followed immediately by the second program in the series, which centers on Picasso.

PBS has a web site in support of the series that has a section for each artist along with an “Explore the Painting” feature that shows some interesting points about the work from the commentary in the program.

The Van Gogh program will focus on Wheatfield with Crows (image above, top), often assumed to be Van Gogh’s last painting. Though that is far from certain, much symbolism has been read into the painting as a result. It will be interesting to see the program’s take on its significance. One of the fascinating things about this painting is that it was part of a series of paintings of wheatfields that that Van Gogh painted in a very unusual elongated shape, on canvasses with an almost cinematic aspect ratio (bearing in mind that this was 1890, and the word “cinematic” was essentially meaningless).

The original painting is in the Van Gogh Museum in Amsterdam. The “Show Enlargement” feature on their site, while a poor substitute for a nice big digital image, does let you zoom way in on the image and see it in greater detail than on the PBS site.

For the Picasso segment, the focus will be on his amazing anti-war masterpiece Guernica (image above, bottom); also, interestingly enough, painted on a large canvas with elongated, cinematic proportions. The original painting is now in the Museo Nacional Centro de Arte Renia Sofia in Madrid, to where it was moved in 1992, stirring up controversy because it defied Picasso’s wish that it be displayed at the Prado. (There is a larger version here, click for enlargement.) There is some history on the painting from a different PBS special here.

It’s interesting to note that a large scale tapestry copy of Guernica, a painting in which Picasso expresses his horror at the cost of war and his “…abhorrence of the military caste which has sunk Spain in an ocean of pain and death”, hangs in the United Nations building in New York at the entrance of the Security Council chamber. The tapestry was a gift to the United Nations by Nelson Rockefeller and was meant to be a reminder to all nations of the terrible price of war in human suffering.

On the day in 2003 when Colin Powell and John Negroponte gave their press conference at the UN in a effort to stir up support for the war in Iraq, a large blue curtain was placed over the work. Excuses were made that it was a request of the TV crews to simplify a distracting background, but word got out from the attending diplomats that it was actually representatives of the US government that had pressured UN officials to have it covered during the conference.

The power of art, you say?

6 Replies to “The Power of Art: Van Gogh & Picasso”