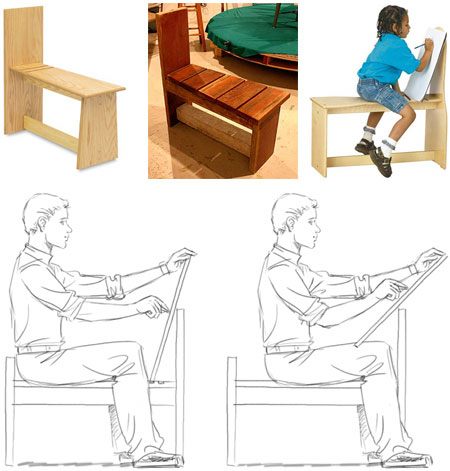 Though I use them for painting, I have never been fond of easels when attending life drawing sessions. They always seemed awkward, uncomfortable and in my way when trying to get from model to eye to hand to paper as directly as possible.

Fortunately, I encountered many interesting tools from the academic art tradition early on when I began taking classes. One of them was the use of a drawing bench, which is often called a “drawing horse” or an “art horse”, I assume because one sits astride it, and/or because one looks about as silly as a child on a wooden hobby horse when using it.

A drawing bench or horse is a wooden bench with one raised end, or with two raised ends, one higher than the other, that is designed to allow an artist (or young buckaroo) to sit astride one end and prop a drawing board up against the other.

The wonderful advantage of a drawing bench over an easel is that the drawing is below your line of sight to the model, rather than to one side.

You look up at the model, straight on and directly above your drawing, rather than stepping back or repeatedly turning your head from side to side. To me this is a much more natural and satisfactory method of drawing from life. I also think it’s significantly more comfortable, particularly over the course of an extended drawing session, or in classes day after day. Despite the notion of noble suffering for one’s art, I prefer to be as comfortable as possible when I’m concentrating on drawing.

Of course, shortly after I began to use a drawing bench, I found I preferred to misuse it. Rather than propping the drawing board almost vertically on the bench, with its lower end in one of the grooves intended for that purpose, allowing the correct arms-length pivot from the shoulder when drawing large scale (shown in my sketch above, bottom left), I began to sit forward on the bench, drawing board propped in my lap and leaning over it so that it served as miniature drawing table, allowing me to finesse small scale drawings (above, bottom right).

Many art schools and drawing sessions provide them, particularly those with 19th century academic traditions, and you can also find them from larger art suppliers. Here’s a fairly standard one from Dick Blick (image above, left). I’ve also come across models like this one (image above, top right), from chlidren’s supplier Sensory Edge that has a rounded end, that restricts your ability to misuse the thing the way I like to.

You can also find variations that have a built in easel, which defeat the purpose in my mind, or that actually have a small adjustable drawing table incorporated.

I’m not suggesting that you run out and drop $$ on a drawing bench. If you’re inclined, and modestly carpentry enabled, you can cobble one together from scrap lumber, as in this fine example of a homemade drawing horse from Meer Image (shown above, top middle).

Also, you can approximate the use of a drawing bench, or at least my assiduously incorrect application of one, by using two folding chairs, one to sit in and the other placed in front of you with its back to you, allowing you to prop your drawing board against the back and lean over it a bit like a drawing table.

If you’ve always done life drawing by turning your head side to side from an easel, this approach is certainly worth investigating; and you may find you like riding the range on your trusty drawing horse.

10 Replies to “The drawing bench (horse)”