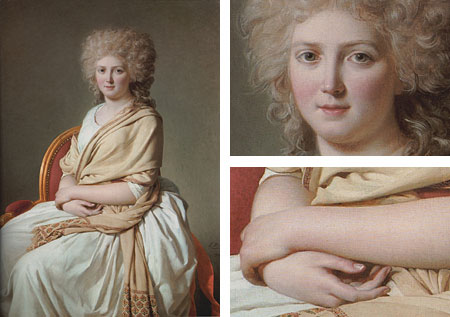 The subject of Simon Schama’s The Power of Art, the BBC/PBS program being broadcast on most PBS stations tonight in the US, is French neo-classical painter Jacques-Louis David.

It’s difficult to separate David’s life and work from the political turmoil of his times, in which he was intricately involved; as I pointed out in my previous post about David, and as I’m sure Schama will go into in detail in the program.

It might be nice, however, to simply stop and look at David as a painter, seeing him directly as in this Portrait of Anne-Marie-Louise ThÃ©lusson, Comtesse de Sorcy, a larger version of which can be seen on the Art Renewal site.

As I pointed out in the post I wrote just before my post on David, a painting that I though for years was my favorite painting by David (and one of my favorite paintings in the Metropolitan Museum of Art, which is saying something) turned out not to be by David, but by Marie-Denise Villers, a student of one of his students.

Perhaps Schama will have some surprises up his sleeve in his look as David as well.

One Reply to “Jacques-Louis David on
The Power of Art”