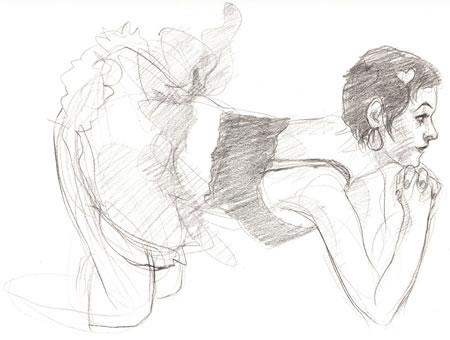 I’ve long maintained that both men and women have only one erogenous zone. (Got your attention, didn’t I?)

I’ll further maintain that this single erogenous zone is located in the same physical location for both sexes, directly between… the ears. Nothing is sexy unless you think it’s sexy.

Which is why life drawing sessions are set up to maintain a professional or academic atmosphere and the sexual element is almost non-existant. This is generally a Good Thing, but it’s nice to know that there are exceptions to every rule.

Dr. Sketchy’s Anti Art School is a series of drawing sessions that looks to put the “arrrrrr” back into art classes, with racy costumes, provocative poses and a generally anti-academic atmosphere.

For more background, see my previous post on Dr. Sketchy’s.

At the time, I mentioned that submissions were being taken for the first Dr. Sketchy’s Anti Art Show.

Dr. Sketchy’s founder, illustrator Molly Crabapple, has written to say that the show is now assembled and will hang at Rapture, 200 Avenue A in NYC, from November 21 to December 20, 2007. The opening party will be November 27th.

There is a gallery online for those of us not in the area, that features work by some of the participants, as well as photographs from the sessions.

Note: The Dr. Sketchy’s site should be considered delightfully NSFW and politically incorrect.