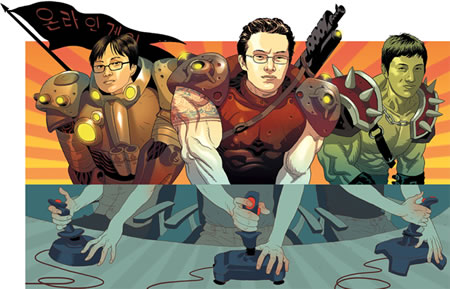 His comics work includes collaborations with French writer Didier Desninckx on Carton Jaune! and Hors Limits, and Israeli writer Etgar Keret on Streets of Rage and Pizzaria Kamikaze, which was a 2007 Eisner Award nominee.

His illustration portfolio features a variety of his work, which can be stylized, straightforward or comically exaggerated. He employs the comic book art conventions of pen and ink line work filled with color, at times rendered and at other times graphically flat. Occasionally, he will even mix the two approaches in the same image as one of his techniques for controlling the focal point of the image. This is a factor that Hanuka seems to devote particular attention to, also employing tone, color and texture to make certain your eye is drawn to the exact spot in a given image where he wants it to go.

The comics section of his portfolio includes covers and sample pages from several titles, both black and white and color. Unfortunately there are no sample pages from Pizzaria Kamakazi, but the pagess from Carton Janune look particularly interesting, with a textural approach tot the application of color the fits the setting. There is also a news section and a (not very informative) bio on the site.