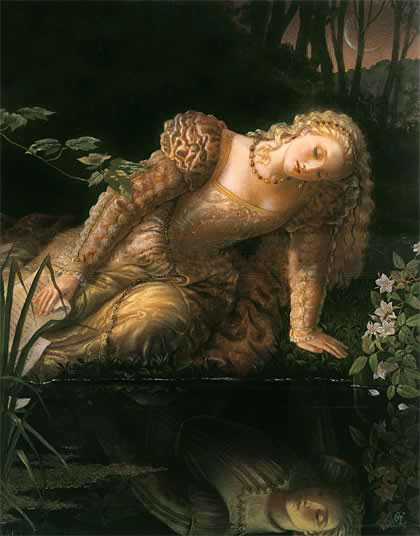 Kinuko Y. Craft takes inspiration from many strata of the history of art and weaves them together into her own intricate and varied images of fantasy worlds; and isn’t afraid to let the threads keep their connection to the original sources of inspiration.

Looking through a gallery of her work, you’ll find a fascinating display of her interest in the styles and techniques of the Pre-Raphaelites and Symbolists, Da Vinci and other Renaissance painters, Baroque portraits, the Orientalists, 19th Century Academics and some of the great Golden Age illustrators who took inspiration in many of the same sources.

At times she will playfully create a homage to a particular artist or period style, at other times she can fascinatingly intertwine several seemingly disparate sources into an uncanny whole (Henri Roussau and Titian in the same image for example).

Craft is well known as a fantasy oriented illustrator and her clients include National Geographic, Time, Newsweek, Forbes, The New York Times, and Atlantic Monthly in addition to numerous publishers and commercial accounts. She has received multiple Gold and Silver Medals from the Society of Illustrators, and several Chesley Awards.

Craft has transitioned away from the demands of editorial illustration and now concentrates on her own themes, and has a successful line of reproductions and art prints that have a wide following. I believe she also continues to work on a line of children’s books in which classic fairy tales like Cinderella, King Midas and Sleeping Beauty are retold.

Her approach varies from elaborate panoramas on which she has lavished intricate detail, to quiet and emotionally focused images of single subjects, with colors alternately subdued or intense.

The image gallery on her site is unfortunately not as extensive as you might like, but it is still a fascinating stroll through not only her own fertile imagination, but also through her fascinations with great artists of the past.