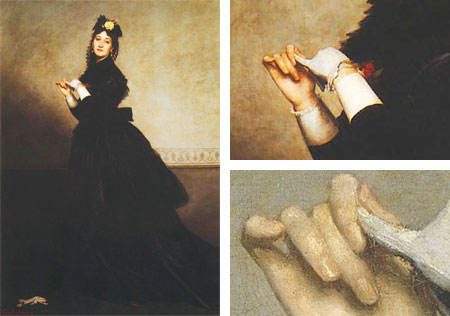 Charles Auguste Emile Durand, who apparently felt that he didn’t have enough hyphenations for a self-respecting French painter and adopted the name Emile Auguste Carolus-Duran, will probably always be better known as the influential teacher of John Singer Sargent than for his own work.

Carolus-Duran studied at the Lille Academy and, after some time in Paris, continued his studies in Italy and Spain, becoming particularly fascinated with the work of the Spanish master Diego Velázquez.

He is considered an Academic painter, but the influence of Velázquez, whose alla-prima technique was also influential on the Impressionist painters, and his association with Manet and Courbet, led him to break from Academic traditions and found one of the most progressive ateliers in Paris. Sargent’s study with Carolus-Duran had a profound impact on shaping him as a painter, and his portrait of his teacher is one of his most noted portraits.

Carolus-Duran himself achieved renown during his lifetime, became a commander of the Legion of Honor and a member of the Academis des Beaux-arts. He was very much in demand as a portrait painter and his portraits are in the collections of some of the world’s major museums.

The image shown here, “Lady with a Glove“, a portrait of his wife , was bought for the collection of the Luxembourg and is now in the Musée d’Orsay in Paris. There is a short commentary on the piece here, and the full listing here.