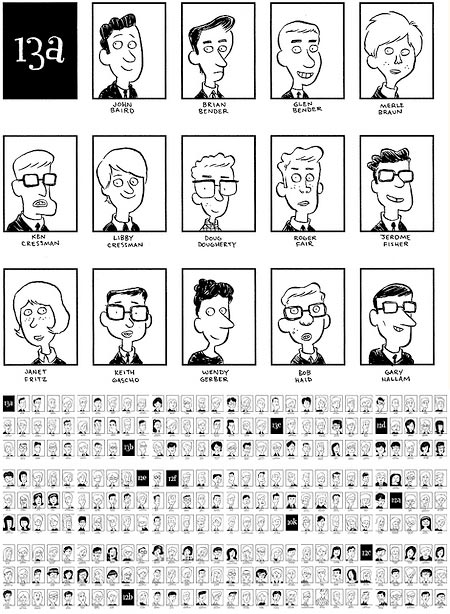 What a terrific idea this is. Last year, cartoonist and illustrator John Martz, also known as Robot Johnny, drew a version of his mother’s entire yearbook from 1968.

He took each yearbook image, over 1,000 of them, and distilled the essence of the face down to a few succinct lines, capturing a cartoon likeness for each individual. The resulting project, called Excelsior 1968, debuted last year at the Toronto Comic Arts Festival.

Martz has published the project as a book, available from his online store, and posted the images as a Flickr set. (I love the look of the thumbnail display for the set, with hundreds of cartoon portraits arranged in a huge grid, it would make a great poster).

Martz is an illustrator and cartoonist who is currently the chair of the Canadian Chapter of the National Cartoonist Society, and is the editor and driving force behind Drawn!, a superb collaborative illustration and cartooning blog that I’m sure many of you are aware of (see my previous post about Drawn!).

I find it interesting that he chose his mother’s yearbook from the 1960’s as the basis of the project rather then his own, perhaps finding the different character of the photography, hair and clothing styles appealing as subject matter.

In following a comment from Martz’s blog post, I came across a different approach, in which artist John Ralston did pen, colored pencil and watercolor illustrations of a much smaller class, drawing the senior class of Hamline University in 1925.