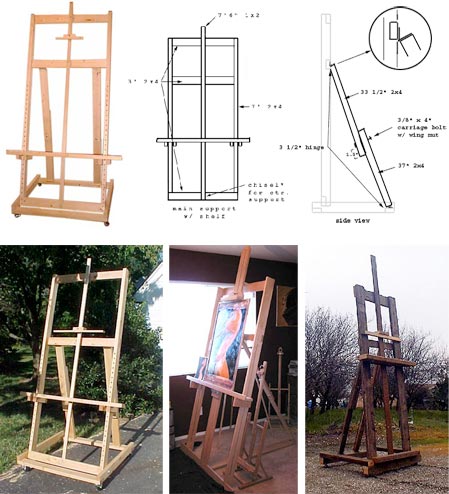 Ben Grosser is an artist and composer who also directs the Imaging Technology Group at the Beckman Institute. As a painter, Grosser paints large scale non-represenational works. After being frustrated early in his painting career by the cost of large easels that would accommodate his desire to paint large canvasses, he decided to build his own.

Impressed by the helpfulness of the free information of various kinds on the web at the time (1998), Grosser decided to contribute his plans to those interested and posted them on his website.

He has continued that practice and the plans, which are detailed, accompanied by a materials list and photographs, are available freely on his web site today.

With them, he states that even a novice, with borrowed tools and no woodworking experience, can build their own large easel for under $100, handling paintings as well as some large easels costing many times that much.

There is also a gallery of photos from people who have built their own easels using Grosser’s plans (images above, bottom row), as well as emails with anecdotes, descriptions of customizations and clever enhancements, and even stories of easels built from scrap materials for under $20, some of them looking wonderfully rough hewn and rustic.

Grosser was offering easily downloadable PDF versions of his plans, but his generosity was repaid by scavengers ripping off his free plans, stripping out his credits and selling them on eBay as if they had created them; so he has had to discontinue the PDFs. The web based plans, however, remain available.

If you decide to build an easel, be sure to send him photos and comments about your experience.

One Reply to “Build Your Own Easel (Ben Grosser)”