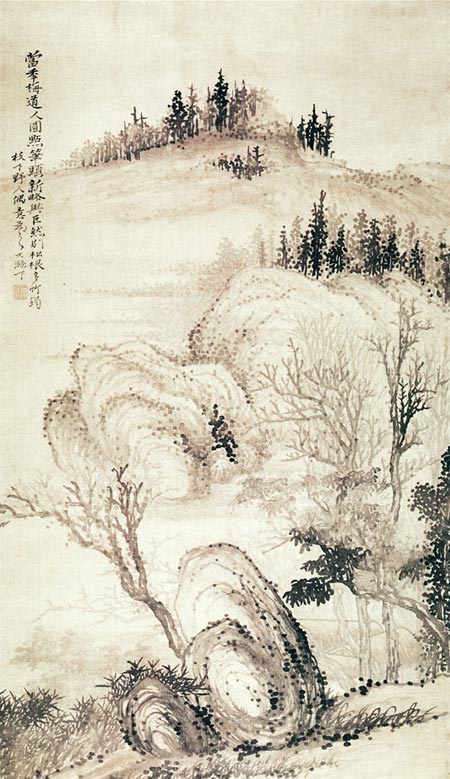 Shitao was a member of Ming royalty, and survived the fall of that house to invaders from Manchuria, changed his name and became a Buddhist monk.

He is classed as an “individualist” painter. Along with some of his contemporaries, he broke with staid and restrictive traditions of the time and utilized new ways of handling washes, perspective and composition.

My knowledge of Chinese ink painting is frustratingly meager, but I see in Shitao’s calligraphic impressions of misty cliffs and cloud filled valleys many of the visual charms that I find so mesmerizing about the best examples of traditional Chinese painting I have seen.

The Shitao section at the Metropolitan Museum of Art contains a series of images called Returning Home, that includes translations of the poems accompanying the images, as well as background information on the artist, the time and the paintings. There is also a stunning handscroll called The Sixteen Lohans.

The Museum of Fine Arts, Boston, has several of his pieces,

The Nelson-Atkins Museum of Art had a nicely zoomable image of Mountain on the Other Side of the River in which you can see the brushwork and washes close up.

The Princeton Art Museum has some good-size images and a short bio.

One of the most extensive resources is a series of 8 unconnected gallery pages of 20 images each on ImageNETion, which can be accessed from this Artcyclopedia page. They are worth the annoying banner ads with which they are saddled.

In Shitso’s remarkable paintings there is a gestural fluidity and marvelous range of line weights, textures and tones (often referred to as “colors” in the context of ink painting) that can be fascinating over extended viewing. Just the contrast between passages of intricate, delicate detail and disarming simplicity can be captivating.

If you’re not familiar with Chinese ink painting, my suggestion is to flip through a few of Shitao’s images to find one that seems appealing or interesting, but then put the others aside and spend some time with that image.

Let Shitao’s magical lines lead you into and through the painting. Though Chinese ink painting is actually more truthfully representational than many Western observers think (you can actually find those “fanciful” mountains in photographs of rural China), the intention is not so much to convey the literal scene, but the spiritual essence of nature, and humankind’s place place in the broader landscape.

Contemplation, as they say, will be rewarded.