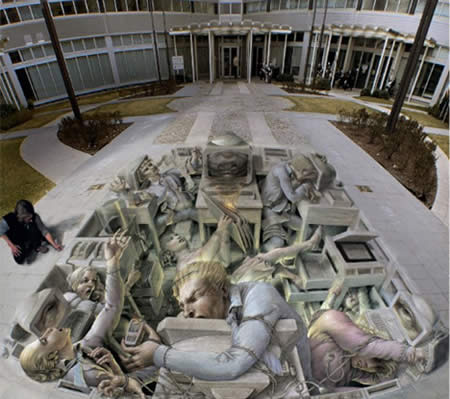 I’ve written before about the illusionistic 3-D sidewalk “paintings” in chalk by artists like Kurt Wenner and Julian Beever, as well as the large scale illusionistic murals by Eric Grohe.

Web Urbanist has posted a nice overview, Amazing 3D Art from the Best Street Artists, with a selection of work by Wenner (image above), Beever, and others; including Edgar Muller and Manfred Stader, Tracy Lee Stum, Eduardo Relero, Rod Tryon and Anthony Cappetto, giving you a quick look at some highlights of this apparently growing phenomenon. It also features muralists like Grohe and Greg Brown, and even a 3-D graffiti artist known as Diam.

Some of the pavement chalk art takes the form of large scale reproductions of famous works by artists like Da Vinci, Vermeer, Rembrandt and others.

Much of the work that has made this a phenomenon is based on anamorphoses, images that are distorted in such a way that they only look “right” form a certain vantage point. The limitation is a trade off for the illusionistic power the images can have to appear three dimensional when seen from that viewpoint. You can see an example of how this works here.

Anamorphosis has been used in art for centuries; you can see a particularly striking example of it in Hans Holbien the Younger’s famous double portrait The Ambassadors, which contains the anamorphic apparition of a skull.

The new urban sidewalk artists have used this approach to create images of objects and environments that, when viewed from the correct vantage point, appear to extend above or below the pavement on which they are painted.

Wenner has gotten new, upscale website since I wrote about him, casting himself as available for corporate commissions and highlighting his architectural designs. Beever is still coasting along like a street artist, with a homemade looking, 90’s style site, but he has added additional images.

Wenner’s site includes some videos of him working, and there are some others on YouTube of a short documentary, Masterpieces in Chalk.

If you look around, you’ll find a few not covered in the Urbanist article, like Cuong Nguyen.

Muralists like Grohe or Brown are in the long artistic tradition of “trompe l’oeil” (French for “trick the eye”), in which artists have created images that appear to have dimensionality beyond the surface on which they are painted, relying less on anamorphosis and more on realism. This tradition includes some of the fantastic dome paintings in which the vault of heaven, filled with angels and religious figures floating in apparent disregard for gravity, is projected on the interior of a dome.

Of course, if you step back and think about it, the modernists were right; all representational art is an illusion.

5 Replies to “Illusionistic 3-D painting on sidewalks and walls”