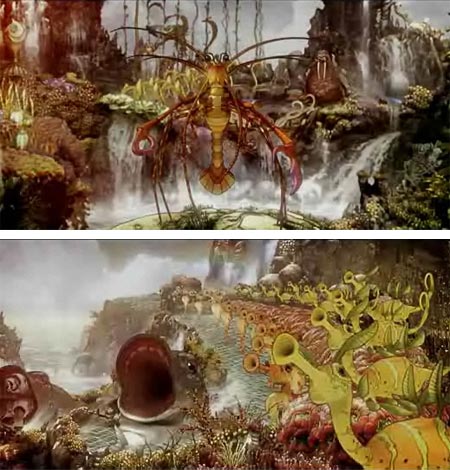 I was watching last night’s dazzling opening ceremonies for the Beijing Olympics on television, alternating between being stunned by the artistic vision and choreographic scope of the event, and appalled by the contrast between that and the jarringly interspersed commercials for dreary consumer products and an apparent attempt by the network to display its most insipid excuses for TV shows; when I was struck by a new animated ad for United Airlines.

United, despite (or perhaps because of) being under Chapter 11 bankruptcy protection since 2002, has been unusually understated and imaginative in their television advertising, notably in the form of a brilliant animated ad called Dragon, directed by Jamie Caliri and created from artfully designed papercraft cut-outs; which I profiled in my 2006 post on Jamie Caliri.

The airline has also had some other, nicely understated, ads using illustrations and animations over that time.

There is a new series of animated ads on United’s site, including a new papercraft ad by Caliri called Heart. Unfortunately, the site navigation for viewing the ads is terrible and I can’t give you direct links. From the main page of ads, choose “Commercials”. You then have to roll over the thumbnail at right to even see the other choices. There are also text links below to archived commercials, including Dragon.

Fortunately, the first choice is the commercial that stood out last night, Sea Orchestra (images above), which I immediately recognized as the visionary style of South African artist Ree Treweek and her collaborator Jannes Hendrikz, whose work I have been following with interest since early 2006.

Their association, along with musician Marcus Smit (A.K.A. Wormstorm), is known as The Blackheart Gang, and the piece that brought them to my (and lots of other folks’) attention is an animated short called The Tale of How, which I wrote about here.

The Tale of How is a wonderfully idiosyncratic and uniquely realized animation, with a combination of Treweek’s beautifully bizarre drawings and character designs and Hendrikz’ imaginative compositing and art direction. It received a special mention at this year’s Annecy Animated Film Festival (see my post on the Annecy opening shorts from Gobelins).

Treweek and Hendrikz have created a production company called Shy the Sun, and applied the same range of imagination and unique vision, as well as some of the Tale of How’s sea-creature theme, to the new ad for United called Sea Orchestra, much to United’s credit for once again stepping out of the narrow vision of mainstream television ads and into the realm of art.

The Sea Orchestra ad, like United’s other animated ads, is set to George Gershwin’s Rhapsody in Blue, which the airline has adopted as their theme music. In a scene similar to the Tale of How short, it shows an island raising from the sea, densely populated by all manner of bizarre sea creatures, who are gleefully playing music (presumably the version of Rhapsody in Blue you are hearing). A whale-like shadow leads to the tie-in with the airline.

The other ads in the new series are nicely done, and certainly worth watching as animated shorts, particularly Caliri’s Heart, but they are outshone by the sparkling imagination and bizarre inhabitants of Sea Orchestra.

Now if only someone with imagination could get the bizarre and icky creatures of the TSA out of our airports, so we could fly with dignity again.

Link: United Airlines animated ads
Sea Orchestra (YouTube)
United Airlines press release about the new ads
The Blackheart Gang, and About page
The Tale of How with prints
Shy the Sun (no content as of this writing)
My previous related posts:
Ree (Cherie) Treweek
The Tale of How
Ree Treweek (update)
Jamie Caliri

5 Replies to “Shy the Sun (Ree Treweek and Jannes Hendrikz)”