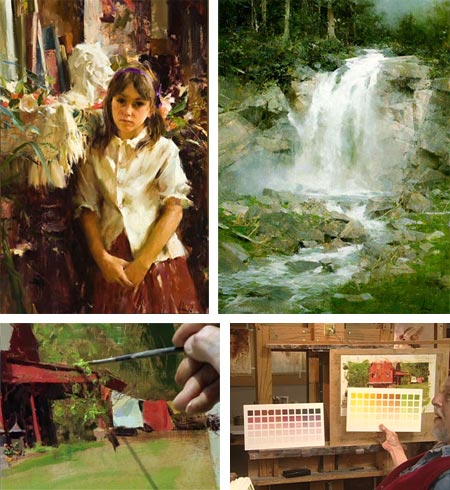 Richard Schmid, though a well known and well respected contemporary American painter, is perhaps even better known as a teacher, through his widely read book and, more recently, series of instructional videos.

His web site doesn’t do much to change this, in that the images of his work, though presented well enough, are frustratingly small. At least they’re frustrating to me, as I’m particularly interested in his economical and beautifully handled brush work, which you can only really appreciate in large images.

You can still see in the reproductions his beautiful handling of color and value, his remarkable ability with “lost and found” edges, and his wonderful control of texture, light and atmosphere. When viewing work on his site, there are images in the Lithographs section in addition to Available Work and Archive Gallery.

Schmid paints alla prima; an a Italian phrase meaning “at once” or “at the first”, that defines the kind of painting done all in one session while the paint is wet, as opposed to the layers of paint used in classical painting. Most “plein air” painting (see my recent post on pochade boxes) is done alla prima.

It is also the title of Schmid’s highly regarded instructional book, Alla Prima: Everything I Know About Painting. (You will find used copies listed for unreasonably high prices on Amazon and elsewhere; it’s in print and reasonable ($50 paperback) from Schmid’s own site.)

Whether the subtitle is true, I don’t know. I suspect Schmid knows considerably more about painting than can be put in one book, but the book is valuable and he has put a great deal of information into its 200 or so pages.

This is not a painting instruction book in the sense of “here is what brush to use” and “here’s how to paint water”. Neither is it conceptual in the manner of books by Hawthorne or Henri, it’s somewhere between those two types of painting books, simultaneously high-concept and down to earth instructional.

The book is divided into chapters like “Starting”, “Values”, “Edges”, “Color and Light” and “Composition”, that are filled with both both practical techniques and food for thought about your approach and intent, with the end goal of using the natural world as your final arbiter in choosing colors, arranging compositions and conveying light and atmosphere.

Not that Schmid is slavishly realistic, far from it. His paintings are quite poetic, but they are based firmly in direct observation of the visual world.

Occasionally you may find him waxing philosophical; and you might disagree with some of his pronouncements. For instance he asserts that there are no such thing as “neutralized” colors; and while I understand his argument, I think it’s a matter of semantics and the term is a useful one. I disagree with him in a number of areas, but bear in mind that he is a better painter than I by a couple orders of magnitude (grin).

My impression of Schmid, and his sometimes lofty tone of voice in the book, was dramatically softened when I watched one of his videos, in which his personal demeanor and tone are much more appealing.

Schmid has a series of four instructional landscape DVDs and one on portraiture. I’ve seen the second in the series, Richard Schmid Paints the Landscape: June (bottom two images, above), and I found it well done, well paced and full of useful information and techniques; particularly for those who are painting alla prima, en plen air (I’m just having fun with painting terms today).

Unlike some instructional videos, this one proceeds at a relaxed pace, in keeping with a pace appropriate for the mindset of painting, and allowing time to see a great deal of his painting process in detail. It’s truncated in places, but the jumps are artfully chosen. The shoot is well directed, dwelling where appropriate on his palette and color mixing process, with close ups of the canvas and shots of the subject that emphasize the points he makes while painting.

The DVD has two parts, the first is a complete on location painting session, from sketch to finished painting, and the second, in the studio, revisits the painting for analysis and goes beyond; into a discussion of color range and the control of edges and color transitions that alone is worthwhile as an instructional video.

Like similar art instruction videos, these are not inexpensive ($75), and the site doesn’t give you a preview video clip to let you know how you might like it (which I think would be a good selling point), though it does offer a few stills from each video.

There is a brief excerpt from one of his videos on YouTube, unfortunately, it’s not a very good or representational segment, and the video compression distorts the image quality, so I wouldn’t judge the videos by it.

Another nice thing about his videos is that you finally get to see his brushwork close up, something that is missing even in the book.

In both his book and videos, Schmid emphasizes some fundamentals that are often glossed over, but are worth being reminded of. One in particular is “doing the charts”; a process that young art students often think is onerous busywork, but seasoned painters know is as invaluable to a painter as practicing scales is to a musician.

This is the process of painting your own color charts, in which you mix a value scale of each color, and then value scales of each color in combination with each of the other colors in your basic palette. It is a process that gives you more color mixing knowledge than a truckload of color mixing books and preprinted charts could ever begin to provide.

It is this kind of adherence to the time tested painting fundamentals, that work and have been successful for representational painters through history, that is the basis for both Schmid’s teaching and his beautifully economical and lyrically poetic paintings.