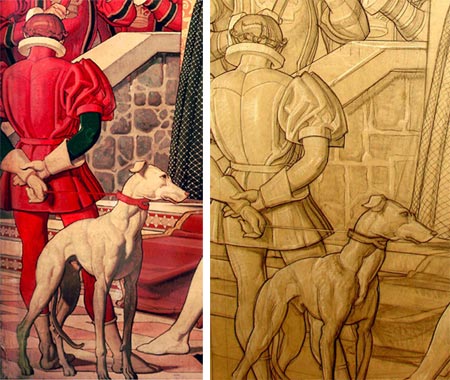 As I mentioned in my previous article on Dean Cornwell, he was a second generation inheritor of the traditions of the Brandywine School of American illustration, having studied with Harvey Dunn, a student of Howard Pyle.

Cornwell’s other major influence was painter and muralist Frank Brangwyn, with whom he studied when he turned his career toward mural painting.

The new issue of Illustration Magazine has an extensive and (I love this phrase) lavishly illustrated article on Cornwell; that plays a much needed role in filling in for the books on Cornwell that should be, but aren’t, in print; notably Dean Cornwell: Dean of Illustrators by Patricia Janis Broder.

You can see a preview of thumbnail images of the entire issue here, though the images are too small to appreciate his work. I give some links to other Cornwell resources in my previous post.

The article features a wide range of Cornwell’s work, including editorial illustrations, posters and pubic service ads for War Bonds, and some of his major mural work, including the famous murals in New York that I mentioned in my other post (images above), and a series for the Los Angeles Central Library, both of which were the subject of controversy.

Jim Winstead, on his blog trainedMonkey, relates how Cornwell was so desperate to win the competition for the latter commission that he entered the contest three times, twice under assumed names; and came in first under the submission for his own name, and second and third for the submissions under his two assumed names.

The Illustration Magazine article also includes some of Cornwell’s detailed and beautifully realized preliminary drawings, which were reputedly were the main reason, along with his limited palette and pre-mixing of colors, that he could sometimes execute a finished illustration in a little as three or four hours.

[Link and notice about the issue via Gurney Journey]

Link: Illustration Magazine #23
Article about the issue on Gurney Journey
Dean Cornwell: Dean of Illustrators (out of print)
My previous post on Dean Cornwell (links to resources)

One Reply to “Dean Cornwell in Illustration Magazine”